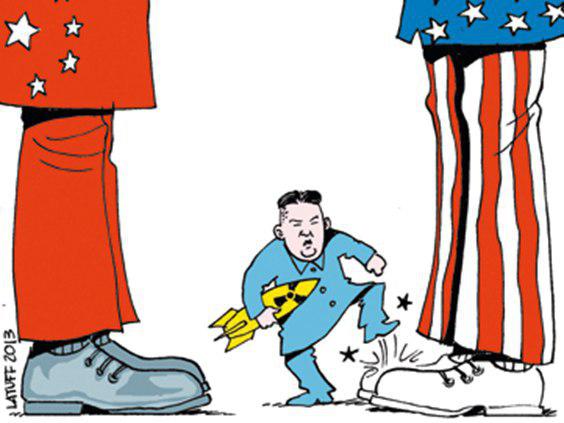 South Korean sources claim that US President Trump’s administration has started secret talks with North Korean officials in New York in an attempt to ease the escalated tensions between the two sides.

Tensions surrounding the Korean Peninsula are extreme, with no immediate sign of easing. North Korea has made it clear it will respond tit-for-tat to aggressive US moves by firing a missile on Sunday morning, although the launch failed dismally.

The geopolitical crisis is expected to face a critical juncture this week as US Vice President Mike Pence is on a three-day visit to Seoul as of Sunday afternoon, during which he discusses a possible breakthrough with his South Korean counterpart, Acting President Hwang Kyo-ahn.

Against this backdrop, a senior journalist has raised startling claims that secret talks had begun between the US and North Korea in New York to end the crisis, according to a report by Korea Times covered by Javan newspaper in Iran.

He did not present any concrete evidence of the alleged secret talks, merely claiming that his claim was based on intelligence from credible sources. The video has been watched more than 150,000 times as of Sunday noon.

“It seems to be true that a secret meeting between the US and North Korea has begun,” Jeong says in the 20-minute video.” As far as I know, the US will demand that North Korea permanently abandon, not freeze, its nuclear program.”

The Korea Times contacted government bodies handling North Korean issues, but nobody confirmed such a meeting.

The favors Washington is reported to have offered in return for the North’s permanent abandonment of its nuclear program are somewhat mind-boggling.

According to Jeong, the US has expressed its willingness to establish a formal diplomatic relationship with North Korea. Once the relationship is formed, Washington would station an infantry outside Pyongyang, North Korea’s capital, to protect the Kim Jong-un regime, and the US Navy would support the mission at North Korea’s military port in Wonsan, according to the journalist.

“If the dialogue turns out to be productive, US President Donald Trump might send his special envoy to the North in a clandestine manner in late April or early May,” he said. “This is a scenario that will play out only when things unfold smoothly. If the talks are unsuccessful, the US might consider a military strike as the next option.”