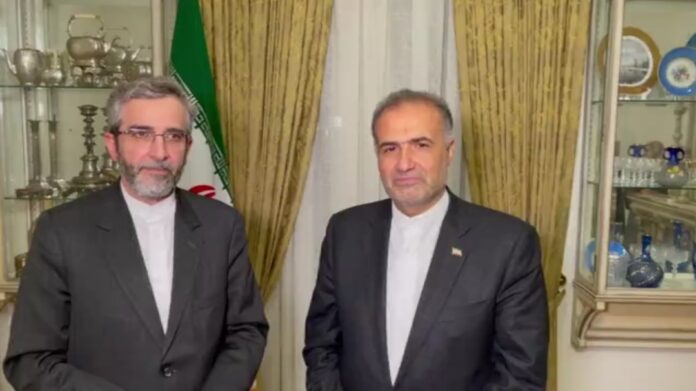 Iran’s Deputy Foreign Minister Ali Bagheri has said the Vienna talks with the European troika, China and Russia will resume soon with the aim of removing the US’s oppressive sanctions.

Bagheri made the comments in Moscow where he’s going to talk with his Russian counterpart Sergei Ryabkov to explore ways of resuming the nuclear negotiations. Bagheri referred to his talks with the EU coordinator Enrique Mora in Tehran and Brussels, describing them as candid and constructive.

Bagheri added that during the meeting with Mora, he outlined Iran’s demands that must be met in Vienna. According to Bagheri, it was also agreed that Iran and each of the signatories to the nuclear deal will hold separate face to face meetings in Vienna to discuss ways of removing the oppressive sanctions.

Bagheri noted that what matters is the seriousness of the other side to lift the illegal sanctions.

Iran and the signatories to the nuclear deal have agreed to resume the Vienna talks before November’s end.

The nuclear deal plunged into chaos after the US withdrawal in 2018. Following its pullout, the US under former president Donald Trump reinstated sanctions on Iran. Tehran rolled back its commitments under the agreement in retaliation.

US President Joe Biden now says he intends to return to the nuclear deal. He has asked Iran to also return to full compliance with the agreement. But Iran says it will only do so after Washington removes the sanctions.