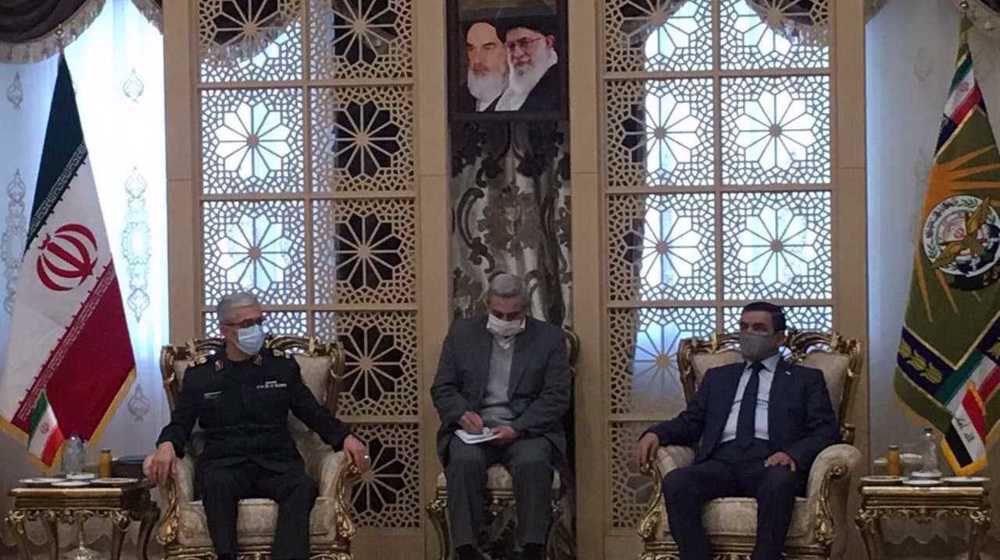 Chairman of the Chiefs of Staff of the Iranian Armed Forces Major General Mohammad Baqeri says defense cooperation between neighboring Iran and Iraq will improve security in the Arab country in the face of US efforts to revive terrorists in the region.

He made the remarks on the sidelines of a meeting with Iraq’s Defense Minister Lieutenant General Juma Anad Saadoun Khattab in Tehran on Sunday.

Speaking to reporters, Baqeri referred to close relations and historical commonalities between Iran and Iraq, saying the armed forces of the two countries enjoy long-term ties and interests.

They, he added, also visited an exhibition of Iranian defense industries and would hold meetings with their Iranian counterparts.

Baqeri further noted that during his meeting with the Iraqi defense minister, the two sides exchanged views on issues related to defense industry and security of the two countries’ common borders, as well as bilateral cooperation and joint military exercises.

“The purpose of this meeting is to develop and deepen security in both Iran and Iraq, but of course Iraq has faced several conspiracies in recent years,” he said.

“And now, as the Americans seek to redeploy terrorists in the region, this cooperation will provide better security for Iraq.”

The two countries have prepared a document on defense cooperation, which will be signed in the near future, Baqeri said, adding that Iran’s Defense Ministry supplied Iraq with the equipment it needed under previous accords.

He also stressed that preparations have been made to strengthen educational, operational and advisory cooperation between the armed forces of the two countries.

In 2014, when Daesh unleashed its campaign of terror in Iraq, Iranian military advisers rushed to the aid of Iraqi armed forces on Baghdad’s request, helping them reverse Daesh’s gains and ultimately liberate their entire homeland from the US-sponsored Takfiri terrorist group some three years later.

Top Iranian anti-terror commander General Qassem Soleimani, who played a key role in eliminating Daesh in the region, was assassinated in a US drone strike upon his arrival at Baghdad International Airport on January 3 at the invitation of the Iraqi government.

At the meeting, Shamkhani touched on defense and security cooperation between Iran and Iraq in their fight against terrorism sponsored by the United States and its allies in the region as well as the Islamic Republic’s unwavering support for the liberation of Iraqi cities from Daesh occupation.

“This cooperation guarantees the stability and security of the region and should be deepened to strategic levels,” he said.

One of US objectives in the West Asia is to create rifts and conflicts among regional states, Shamkhani stressed, underlining the need for the regional countries to exercise vigilance against “the sinister plot.”

He also underscored the importance of preserving security along joint borders, warning, “The Islamic Republic of Iran will deal decisively with any component of insecurity that intends to disturb the people of the two countries and their peace.”

Shamkhani further hailed a decision by the Iraqi parliament to expel US troops from Iraq.

Khattab, for his part, hailed Tehran’s support and assistance for his country in repelling terrorism and stressed expanding bilateral relations, especially in military and security sectors.

No third country can affect relations between Iran and Iraq, he said, noting that the experience of the two neighbors in the fight against Daesh showed that any crisis can be overcome through joint cooperation.