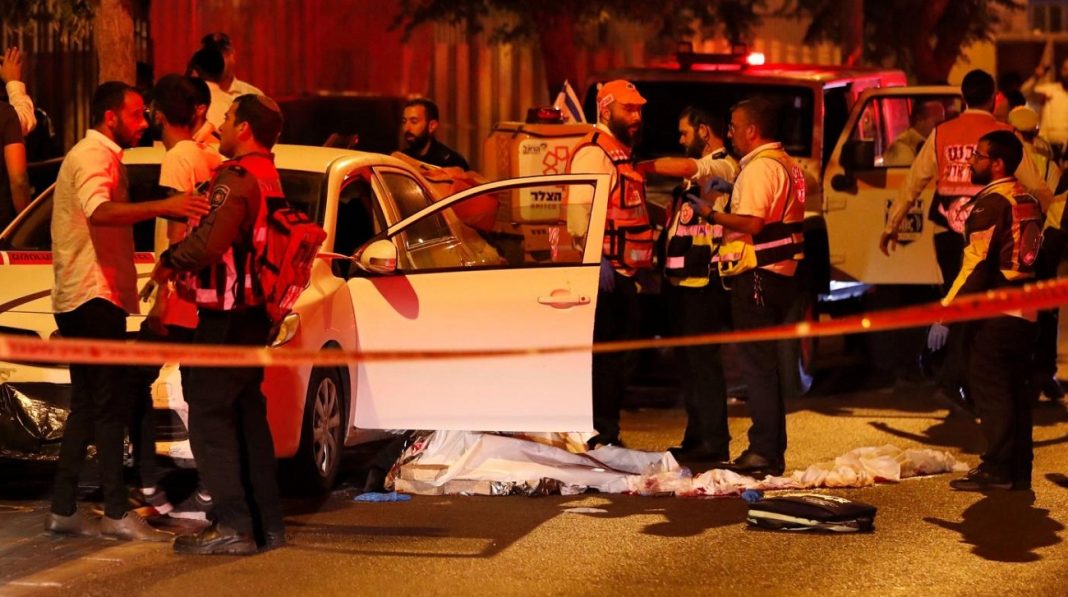 Israeli medics say at least three people were killed in a stabbing attack near Tel Aviv on Thursday night.

Police said the attacker fled in a vehicle. Security forces set up roadblocks in the area around where the killings occurred in the town of Elad.

The Magen David Adom emergency service announced three people were killed and four others were wounded; two of the wounded were in serious condition.

Police added the incident, which occurred as Israelis celebrated “independence day”, appeared to be a “terrorist attack”.

The majority of Elad’s residents are members of Israel’s ultraorthodox Jewish community, known as Haredim.

Alon Rizkan, a medic with Magen David Adom rescue service, described a “very difficult call” when he arrived at the scene in Elad.

He stated he identified three dead people at various locations and four others who were wounded, two seriously.

The United States announced it “vehemently” condemned the incident and was in contact with Israeli authorities.

“This was a horrific attack targeting innocent men and women,” Secretary of State Antony Blinken said in a statement.

“Our hearts are with the victims and loved ones of those killed, and we wish those injured a speedy recovery,” he added.

Tensions between Israelis and Palestinians have soared in recent weeks, with attacks in Israel, military operations in the occupied West Bank and violence at Jerusalem’s most sensitive holy site.

Hamas, the group which governs the besieged Gaza Strip, lauded the attack and linked it to Israeli security forces’ raids in occupied Jerusalem and the Al-Aqsa Mosque – one of Islam’s holiest sites – but did not claim responsibility for it.

“The heroic operation in Tel Aviv is a practical translation of what the resistance had warned against,” he added.

Israel marked its independence day on Thursday, a festive national holiday in which people typically hold barbecues and attend airshows. For Palestinians, the anniversary of Israel’s 1948 declaration of independence marks the Nakba, or catastrophe, when at least 750,000 people were violently and forcefully expelled from their homes and villages in historical Palestine.

The Al-Aqsa Mosque compound has been at the centre of weeks of violence following a series of Israeli incursions into the holy site, which began at the start of the holy month of Ramadan.

Earlier on Thursday, Israeli police entered the site to clear away Palestinian protesters following Jewish visits that had been paused for the Muslim holidays resumed. Police fired rubber-coated bullets as some Palestinians sheltered inside the mosque.

The Palestinian Red Crescent emergency service confirmed two Palestinians were taken to a hospital after being hit with batons.

The surge of attacks and confrontations during the past month has raised fears of a slide back to a wider conflict similar to last May’s 11-day Israeli assault on Gaza, in which more than 260 Palestinians in Gaza and 13 people in Israel were killed.

Settler attacks against Palestinians and their property are a regular occurrence in the West Bank, as well as in occupied East Jerusalem.