Those behind Attack on IRGC Staff to Be Punished Soon: Rouhani 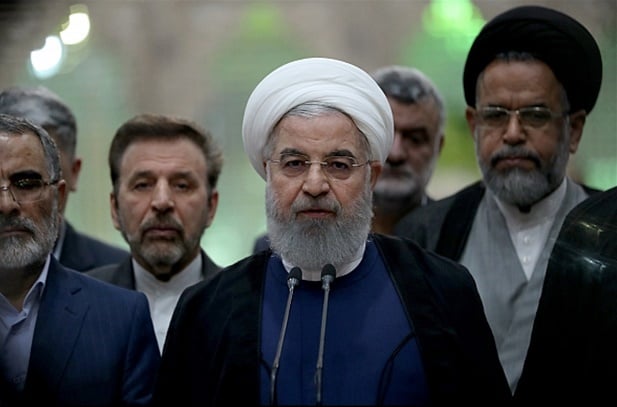 Iran's president has condemned the recent deadly terrorist attack in the country's southeastern Sistan and Baluchistan province, saying its perpetrators will soon be punished.

In a message on Thursday, President Hassan Rouhani said the brutal attack on the bus carrying the devoted personnel of Iran’s Islamic Revolution Guards Corps (IRGC) on the Khash-Zahedan road signifies the true extent of the desperation of criminal mercenaries and the cronies of the Iranian nation’s enemies.

“And those who emigrated in the way of God and then were killed or died, God will bless them well ” (Koranic Verse)

Criminal mercenaries and the cronies of the Iranian nation’s enemies could not tolerate the glorious and epic turnout of our countrymen on the 40th anniversary of the victory of the 1979 Islamic Revolution of Iran, and showed off the great extent of their desperation and disappointment by launching a savage attack on a bus carrying the devoted personnel of the IRGC on the road from Khash to Zahedan.

This terrorist and cowardly act, which killed or wounded a large number of brave IRGC forces and those who had put their lives on the line to safeguard the security and power of Islamic Iran, touched the hearts of all Iranians.

While expressing my heartfelt condolences to the bereaved families, I also condole with the Supreme Leader [of the Islamic Revolution Ayatollah Seyyed Ali Khamenei], the Iranian nation, and the Armed Forces, especially brave IRGC personnel, and wish the most elevated positions for those martyrs, wish patience and reward for the survivors, and wish rapid recovery for those wounded in the incident.

This crime is yet another ignominious blot on the dark track record of main supporters of terrorism at the White House, in Tel Aviv, and of their regional cronies, who both carry out farcical and fabricated acts to promote Iranophobia, and claim to be fighting terrorism and seeking to create security in the Middle East. However, the lives and property of people across this region have fallen victim to their arms deals and dollars stained with the blood of the oppressed.

Incontrovertibly, those ordering this sinister and shameful act as well as its perpetrators will soon receive their retribution thanks to the efforts and perseverance of the country’s powerful security and law enforcement forces, and the rapport and integrity of Iranian people in safeguarding the lofty ideals of the Islamic establishment and national sovereignty will once again kill off their pious hopes.”