This Iranian Girl Is Used to Fighting for Her Life 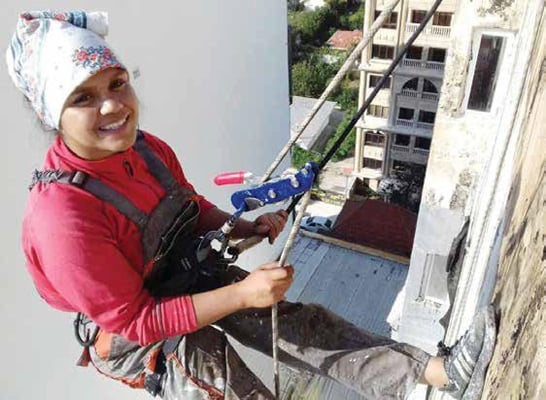 Shora Fekri, 28, is an Iranian girl who waterproofs rooftops, installs placards, inserts wall plugs into exterior view of buildings and does many other things which may seem odd for women in Iran.

Shora is crazy to work at heights. Hailed from the northeastern city of Amol, she holds an MA in economy from University of Mazandaran. She is now living and working in the same province.

Like many others who work at heights, Shora loves mountaineering and rock climbing.

“It’s nearly a year that I’m working at heights. Of course, I had been rock climbing two years earlier and underwent some training courses for about eight months to work at heights. Despite having an official certificate in this area, I still feel like an amateur,” she said.

Elaborating on the problems of working at heights, Shora says it is not easy at all and if you don’t follow the safety tips, you may develop Suspension trauma, also known as harness hang syndrome (HHS), which occurs when the human body is held upright without any movement for a period of time.

“To be honest, at first, the work seemed very horrible to me but today, I have no fear and even love it. When you are sure about the safety of the equipment, there would be no fear anymore,” she noted. 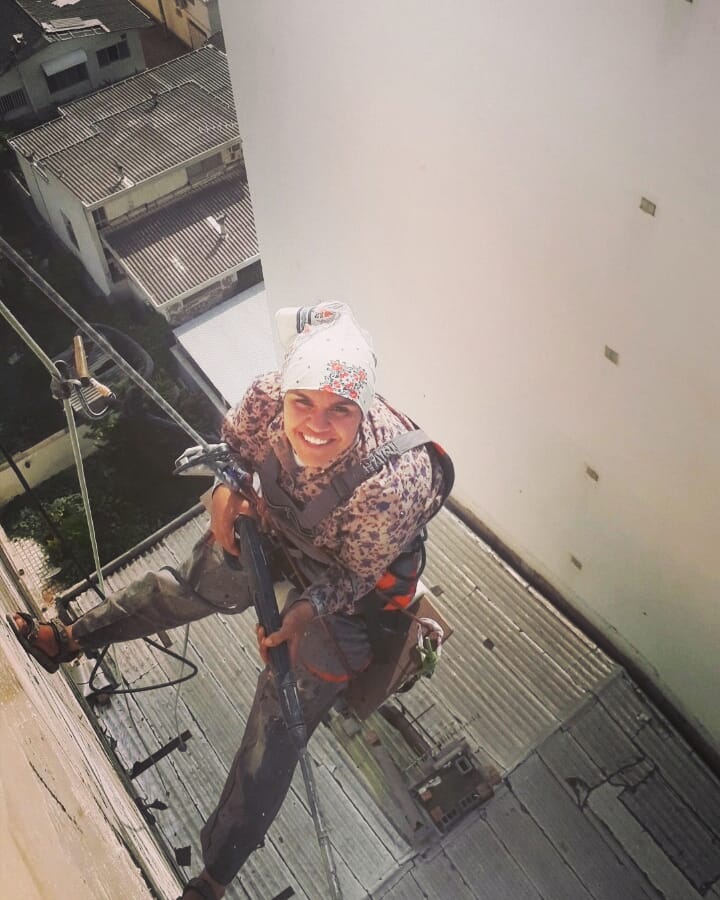 Shora does a variety of works at heights which is hard to imagine. “It depends on my contracts. Sometimes I paint, sometimes I waterproof rooftops, and sometimes I do insulation or install placards.”

Asked whether or not she knows other women having the same job, Shora said, yes there are at least two other women.

“To me, work should not be viewed through a sexist prism. I think women, who are generally delicate and soft-minded, may even be more successful when it comes to works like what I do, but only if they accept the conditions and come to terms with the fact that they may lose their soft skins and get tough in appearance and behaviour.”

“This requires them to always keep their nails and hairs short. Meanwhile, their skin may get dark under the sun. They should also keep themselves in a good shape,” she added.

Shora turned to working at heights after making a deep change in her life. In her teenage years, Shora weighed 125 kg. She was a reclusive girl with rare contacts with people around her. Fed up with the blames of her family and the society, she decided to make a change because even getting the highest scores at school couldn’t make a change to the society’s judgment of her.

“By reading books, I tried to know the world around me. Due to my heavy weight, I couldn’t get a deep understanding of my environment. So, I mostly lived in my imaginary world. But at the age of 18, I decided to face the world in reality. So, I began to decrease my weight and today I’m 62 kg. Resolving such problems is highly significant. I think facing our problems helps us to grow up.”

After losing weight, she began to go for mountaineering and rock climbing. She has already conquered Damavand as well as a number of other peaks in Iran and abroad including Georgia. Shora is now writing her own book instead of going through others’ books.

She is an exemplary case for those who always complain about life’s problems without taking any step to remove them. And also for those who doubt as to whether a girl can work at heights. According to Shora, “most of my relatives who haven’t seen me since a long time ago feel shocked after visiting me. They can’t believe that I’ve considerably lost my weight and turned into a sociable girl who works at heights.”

In response to a question about how long she could put up with working at heights, Shora said “I’m in love with my job and it goes without saying that I have my own big dream which I prefer not to talk about here. But I’m sure that I will keep working at heights as long as my physical condition allows.”