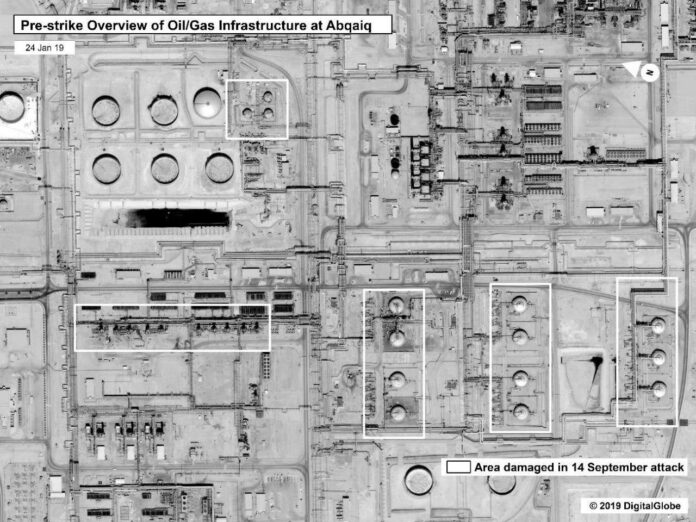 The September 2019 attack that cut Saudi Arabia’s oil production by up to 60% and has thrown the world into chaos was not a surprise.  The claim by US Secretary of State that “Iran did it” is no surprise as well.

That Yemen did it, destroyed the world’s largest oil refinery that has the world’s best air defenses, almost, is a surprise.  It is also quite possible that some other “player” is responsible.  Let’s postulate about that a bit, perhaps even delving into the kind of conspiracy theories that, of late, have turned out to be correct over and over.

The same thing happens to Israel as well, which has led that nation to make “under the table” deals with Hamas over and over while the Likudists play out their “goosestepping” militarist roles for Israel’s misled population, one subject to military censorship over everything they read and see.

You see, the S400 is for defense against lots of things, but for Saudi Arabia with highly robust defenses already, the S400 would be used to stave off attacks from stealth aircraft, its specialty.  Of regional players, only Israel has such aircraft.

But then, aren’t Saudi Arabia and Israel good friends, after all, each secretly aided ISIS and al Qaeda for years.  But are they really friends or was this a “marriage of convenience?  For those who read MSM, even those questions will be unfamiliar as the terror pact between those nations has been censored widely.

What might drive things to get to the point where Israel might bomb Saudi Arabia? Well, Israel is facing an election and a key part of that election is the meltdown Israel is having over its “first couple,” the Netanyahus.

Money dictates politics there as everywhere else and the Adelson family, richest Israelis, have been picking up the political bills for the Netanyahus for years.  That’s over.  The Adelsons now say the Netanyahus are crazy and Miriam Adelson is a psychologist.  This is no small problem as the Adelsons are the biggest political contributors in the US as well.

To get past this, Netanyahu promised to declare most if not all the West Bank as part of Israel, a deal-breaker for nations that had, temporarily at least, begun looking at rebuilding relations with Israel, that being Turkey, Saudi Arabia and maybe even Iraq.  That’s all done now.

Then the issue of random and continual bombing of Syria by Israel, bombing attacks supposedly on Iranian troops but too often killing civilians or clearly intended to aid operations of terror groups.

Let us add, by terror groups, we mean groups officially banned in Russia as terror groups, a list you don’t casually get on as in the US.  Russia really hunts down terrorists.

According to reports from the Jerusalem Post, Russia has expressed extreme “concern” of not only Israel’s attacks on Syria but their move to seize the ad hoc Palestinian State on the West Bank and “ethnically cleanse” its Palestinian population, causing an unprecedented humanitarian disaster.

Netanyahu returned from his September 2019 visit to Mosco, with all reports indicating that he was deeply chastised by Putin.

Then there’s the loss of John Bolton, former presidential advisor who, for the past few decades, has been on the payroll of one Israeli run special interest group or the other, a man many if not most Americans consider the worst presidential advisor ever, one that keeps coming back to life like a zombie.

The answer was simple.  Israel is at the end of the road with Saudi Arabia.  ISIS is defeated and their cooperation in backing ISIS against Syria and Iraq is now an embarrassment.  Saudi Arabia is now seeking peace with Yemen, a disaster for Israel’s regional policy of “keep all wars going.”

Worst still, the UAE and Iran are now openly cooperating in Persian Gulf security. Thus, when a huge Saudi oil complex was hit over and over in a 9/11 style attack, figuring out who might well have done this is relatively easy.

It doesn’t benefit Iran.  This would be a direct attack on Saudi Arabia and Iran has been winning the political war, not just with the UAE but Russia and the EU as well along with continued support from China. Iran had no reason to attack.

Yemen is at war with Saudi Arabia and has some capabilities but not these capabilities, not to obliterate the biggest cash producer Saudi Arabia has.  Only one nation in the region has the F35, a plane designed to take out oil facilities.

You see, along with stealth, the F35 has limitations.  If it operates without other aircraft along, like the F15E bomber, the limited bomb load of the F35 is only useful against targets that are vulnerable to smaller weapons, targets like oil refineries.

This proves capability.  I think we have more than proven Israel’s motivation and timing. We can still claim Yemen did it and Yemen would be happy to take credit except for no military expert remotely accepts that Yemen did this.

We do know that, for Iran, there would have been no reason.  Iran was already winning. We could also look for recent analogs.  Why did Syria turn to poison gas whenever they were in the last stages of crushing areas controlled by terrorists closely tied to Israel?

What are we saying or perhaps not saying here?

Thus, when Russia took 40 members of the White Helmets organization to The Hague to testify to their complicity in staging fake gas attacks on behalf of unnamed Western powers and Israel, when dozens of witnesses, parents of children kidnapped by the White Helmets or doctors threatened by them testified, the press blacked it out.

In the long run, the now two-decade war that involves fake terror events, staged color revolutions and endless political misdeeds, at the center of it all we find Israel and their political allies who hold power in the US, Britain and France due to financial support from sectors tied to Israel, not just lobbyists but criminal groups as well.

Keeping the lid on this is the army of fake think tanks, bribed and blackmailed politicians, press operatives, wholly-owned media groups, and politicized social media monoliths.

Still, in the end, Israel seems to be circling the drain, more hated than ever, more Isolated and, oddly enough, less and less of a “Jewish state” and more of a “criminal state.”

Proving this point, we need only refer to the statements by Donald Trump of the betrayal of Israel by American Jews, people who put ethics above politics, who put America before a brutal Israeli regime.

Trump calls American Jews “traitors.”  Some simply call them Americans like others.  At one time, Israel was defended by its ability to draw on the holocaust and smears of anti-Semitism when their brutality against their own people was exposed.

Time is now closing in.  Did Israel bomb Saudi Arabia?  Will Israel’s remaining “man in Washington,” Mike Pompeo get the war Israel is asking for, a war where Israel will be destroyed as well?

Wait, who would want Israel destroyed to save himself?  Are the Netanyahus as “crazy” as Shelly and Miriam Adelson claim?

Would they “burn Israel to the ground” to save themselves from prison for corruption charges?  Who benefits if even Israel is destroyed in a war seemingly begun to advance Israel’s interests?

Do understand this, it is necessary to think of the world as being in a “post-nation-state” phase. When one does that, conspiracies are easier to understand and accept.

Disclaimer: Quoting and publishing the viewpoints of experts on this website and republishing articles originally published on other websites do not necessarily mean the Iran Front Page endorses and agrees with all those points of view.

* The above article has been written by Gordon Duff and published at veteranstoday.com. Gordon Duff is a Marine combat veteran of the Vietnam War that has worked on veterans and POW issues for decades and consulted with governments challenged by security issues. He’s a senior editor and chairman of the board of Veterans Today, especially for the online magazine “New Eastern Outlook.”