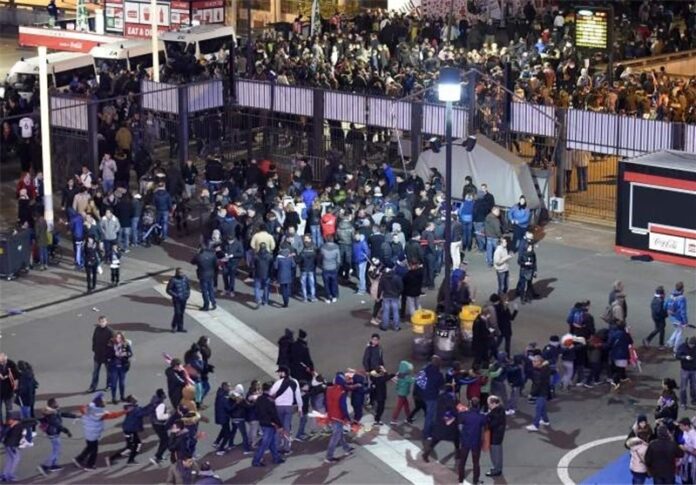 A renowned Arab journalist has said that Paris attacks are likely to be just the tip of an iceberg, and not a passing episode, adding that elimination of terrorism needs something more than security and military approaches.

The terror attacks in Paris late Friday were just the tip of the iceberg whose scope is highly likely to be expanded in the future. The enormity of the attacks clearly shows that security and military approaches alone will not work when it comes to the elimination of terrorism.

Abdel Bari Atwan, a prominent Arab writer, has described the terror attacks in Paris as the tip of the iceberg, saying that to understand terrorism [better], people should pause to think about the reasons why such a phenomenon has emerged.

The fact of the matter is that this phenomenon is the direct result of military interventions, weakened central authority in [certain regional] countries, and efforts to redraw the Middle East map in line Western interests and plans, he added.

Tasnim News Agency on November 15 published the remarks of Atwan, who is the editor-in-chief of Rai al-Youm, an Arab world digital news and opinion website, on six main reasons behind coordinated terror attacks by ISIS. The following is the translation of part of what the Iranian news agency quoted Atwan as saying in an article originally titled Europe in shock; six key reasons behind ISIS attacks:

In less than two weeks, ISIS carried out more than four terrorist attacks – including exploding a Russian passenger plane, attacks on two security and military training bases [in Baghdad], suicide bombings in Dahiyeh, a crowded suburb of Beirut, and multiple Paris attacks – which have been unprecedented in a decade in terms of scope, psychological impact, and human losses.

To understand terrorism, why it has emerged and how its power has grown, we need to take into account and analyze the following six points:

Second: Disillusionment of millions of illiterate, jobless youth who are not living in the present and have no promising future

Third: The West’s support for the corrupt, dictatorial governments of Arab countries

Fourth: Military interventions which began in Iraq and extended to Libya, Syria and Yemen

Fifth: Racial and sectarian classifications which have turned into the main bone of contention in regional civil wars

Sixth: Promotion of a Takfiri mindset through modern social communications media by ISIS. It is worth mentioning that ISIS has over 50,000 Twitter accounts with its sympathizers releasing as many as 100,000 tweets on a daily basis.

Most, if not all, Western countries are not willing to admit that these reasons are a factor [in the emergence of ISIS] and that they have had a role in preparing the ground for terrorism – which is a dangerous phenomenon – to grow. But the fact of the matter is that terrorism is a phenomenon which has been created as a result of military interferences and efforts to redraw the Middle East map simply to introduce Israel as the regional heavyweight.

The bloody attacks which were carried out in Paris by militants using suicide vests and rifles serve the interests of ultra-rightist parties and groups and their racist policies against more than 30 million Muslims in Europe who are mostly living in France, Germany and Italy.

When such a situation leads to acts of violence and retaliatory attacks, it will trigger confrontation, and the specter of fear, horror and instability will haunt the world. That will most likely be more horrific than Friday’s attacks in Paris in terms of magnitude.

The West should not rely simply on military and security solutions

The Western governments are expected to look for solutions – other than security and military approaches – to counter the destructive phenomenon of terrorism. To that end, they are expected to focus – more than anything else – on their Middle East policy, because those who detonated train stations in Madrid and London held up their reaction to the [US-led] invasion and occupation of Iraq and the killing of millions of people there as reason behind the acts of terror they committed.

Furthermore, ISIS has in a statement claimed responsibility for the Paris attacks, saying that the attacks were launched in response to the bombardment of its positions [by the anti-ISIS coalition of which France is a member].

All things considered, we are not saying that security solutions should be dispensed with, because all governments are entitled to defending the interests of their people and eliminating any terrorist activity which poses a threat to their countries. What matters more is the fact that elimination of threats should come with a well-thought-out attitude toward terrorism, and not policies which are adopted based on superficial reactions.

The condolence message of Syrian President Bashar Assad to his French counterpart [in the wake of the Paris attacks] is believed to have come with a kind of reproach. “What France suffered from savage terror [on Friday] is what the Syrian people have been enduring for over five years,” said Assad in his message.

It sounds as if Assad was asking whether his warnings that some signs should be thoroughly studied had been heeded.

What unfolded in France on Friday was a sort of terrorist act which does not distinguish between nations, religions and faiths. It is where the real threat of this phenomenon lurks, something which makes it all the more necessary [for us] to study terrorism from different angles. After all, what we witnessed in Paris is likely to be the tip of the iceberg.