The Israeli Minister Gets Chummy with Saudi Arabian Authority 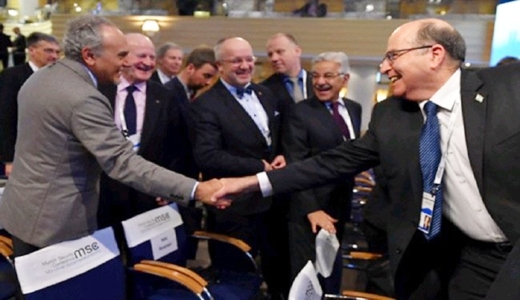 After giving a speech at the Munich Security Conference, Moshe Yaalon, the Defense Minister of the Israeli Zionist Regime, went to Turki Al-Faisal, the director of the Saudi Arabia General Intelligence Directorate, and warmly shook hands with him.

As reported by Al-Alam News Network, the meeting of the two authorities at the Munich Security Conference seemed to suggest that there had been previous close contact between them.

The members of the Israeli delegation accompanying Yaalon, the Defense Minister, and Al-Faisal’s entourage also greeted each other with warm smiles. The photos published of this scene imply a certain level of intimacy among them.

It remains worth mentioning that the Israeli Defense Minister talked about channels of contact between his country and the Arab states bordering the Persian Gulf in his speech at the Munich Security Conference, saying, “Meetings with these countries are going on behind closed doors.”

Yaalon emphasized that there are confidential contacts between Israel and the Arab states around the Persian Gulf.

The Munich Security Conference is held annually in the Bayerischer Hof Hotel in Munich, Germany in February, and hosts guests from all over the world. This year it was held from February 1 to 14.

This conference covers a wide range of important international security concerns, and this year the Syrian civil war and the refugee crisis are on the top of its list.