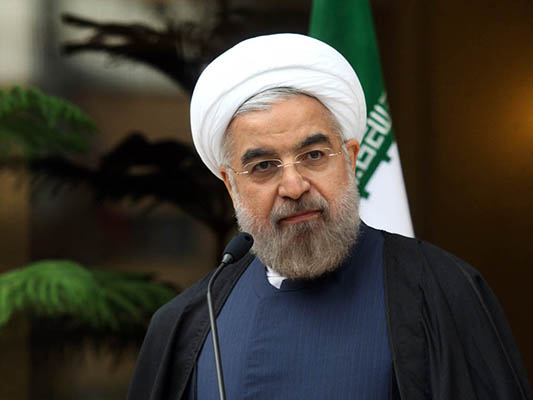 Iranian President Hassan Rouhani has criticized the US administration for its missile attack on a Syrian airfield, saying the move has just served the interests of terrorists in the Arab country.

On US President Donald Trump’s order, the US military launched 59 missiles in the early hours of Friday targeting an airbase in the Syrian province of Homs. The attack came in response to an alleged chemical attack on Idlib, which the US blames on the Syrian government.

According to a Farsi report by IRNA, Iranian President Rouhani condemned the attack on Saturday, saying the US thinks of itself as the world’s police and leader and decides to take actions unilaterally.

“They attacked a Syrian airbase with their missiles overnight and martyred a number of innocent people. What was the occasion and reason for invading an independent state? The gentleman currently ruling the country used to claim that he intended to fight terrorists. Nevertheless, [currently] all the terrorists in Syria are happy and celebrating thanks to the move by the US.”

“If the US government was telling the truth [about its anti-terrorism plans and intentions], why did it support terrorists and become their sponsor in its first move?” he asked, speaking in a conference in the Iranian Ministry of Interior.

Addressing the US government, President Rouhani asked, “Why did you take action against the Syrian army which is fighting against terrorists? Why have you taken unilateral action against Syria and launched your missiles from the Mediterranean Sea? What permit did you have for such a move? Which law had authorized you to carry out the attack? You did not even obtain any permit from the UN and your own Congress, which both have many flaws, and invasively, flagrantly and cruelly invaded Syria irrespective of and against all the international principles.”

The Iranian president further called for the establishment of a fact finding committee to probe into the alleged use of chemicals in the Tuesday attack on Khan Shaykhun, which was used by the US as a pretext to attack the Syrian airbase on Friday.

Rouhani said, “Of course, biased people should not be appointed to the committee. In addition, the US should not preside over such a board. The commission is required to be chaired and served on by impartial countries and people to be able to examine the issue and determine the veracity of the claims about the use of chemical weapons by Syria: Where have these weapons come from? Who has supplied them? Have there been any chemical weapons at all?”

He noted that two years ago, the officials of the United Nations (UN) announced that they had collected all the chemical weapons from Syria.

Therefore, he added, it is required to be determined where the claims about the use of such weapons have come from.

He further urged the Iranian nation to be united and cognizant more than ever, as no one knows what the people who have come into power in the US are plotting to do to the region and the world.

“We are required to be consciously devising clever plans to be prepared for different possibilities.”