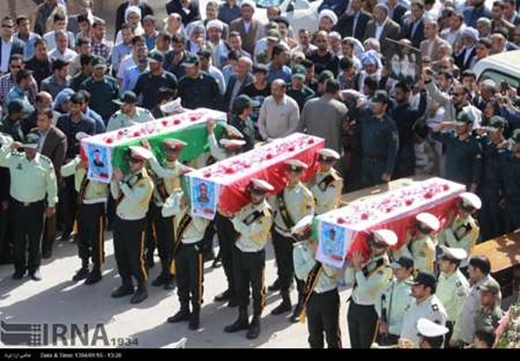 The three police officers were martyred while on duty on April 2 in a police station in southwestern Iran.

The terrorists who assassinated three police officers in Hamidieh, Kuzestan Province, have been identified and will soon be arrested, a top Judiciary official in Khuzestan Province said on Monday.

Secretary of the headquarters in charge of the campaign against crimes in Khuzestan Province Farzad Farhadi-Rad made the remarks in a meeting with the staff members.

He said that a working group comprised of IRGG, IRIP and intelligence officers, as well as Judiciary officials was established to survey the matter speedily.

The three police officers were martyred while on duty on April 2, 2015, in their police station in Gambouah Village of Hamidieh, Khuzestan province.

The bodies of the three martyrs were officially marched by their colleagues and the citizens of the city of Hamidieh and then buried in their hometowns of Hamidieh, Ahvaz, and Izeh, the cities all in Khuzestan Province.