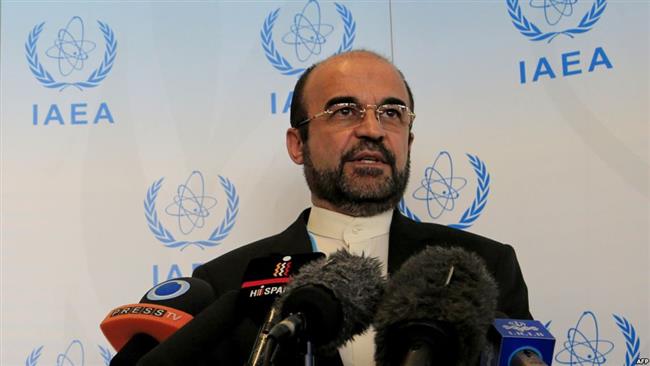 Iran's Reza Najafi has said that some solutions were found in a meeting between Tehran and the IAEA regarding the existing disputes in the nuclear case.

Iran and the International Atomic Energy Agency (IAEA) have come up with a series of “solutions” over outstanding issues in the country’s nuclear program, says the Iranian ambassador to the IAEA.

Reza Najafi made the comments following a one-day meeting between delegates from Iran and the IAEA in Tehran on Wednesday.

“In this meeting, some solutions were found regarding the existing disputes,” Najafi told IRNA, adding that the two topics required further discussions in the next meeting.

The two items are related to the alleged use of “high explosives” in Iran’s western Marivan region and information on “neutron calculations”, Najafi said.

Headed by Vario Ranta, a deputy of IAEA Director General Yukiya Amano, the delegation arrived in the Iranian capital earlier in the day.

The meeting was held under the terms of the Framework for Cooperation Agreement, signed by Amano and Head of the Atomic Energy Organization of Iran Ali Akbar Salehi in Tehran in November 2013.

Iran and P5+1– the US, Britain, France, China, Russia, and Germany – reached a landmark understanding over Tehran’s nuclear program in Switzerland on April 2. The two sides are set to start drafting a final accord slated to be finished by the end of June.