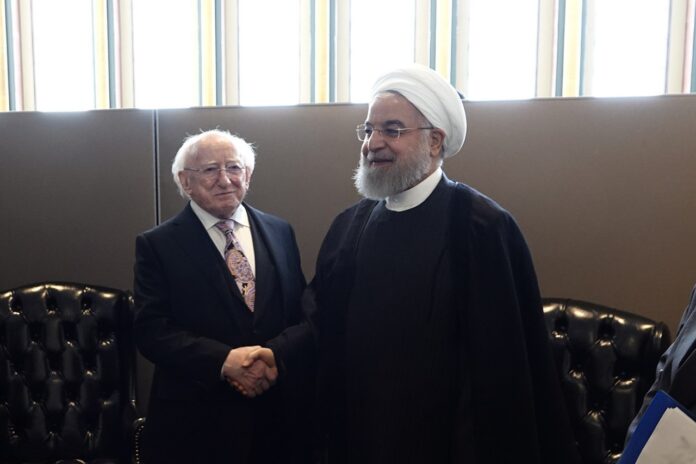 Iranian President Hassan Rouhani has discussed issues of mutual interest with his Irish counterpart Michael D. Higgins in New York on the sidelines of the 74th annual meeting of the UN General Assembly.

During the Wednesday meeting, Rouhani said Iran is determined to deepen its relations and cooperation with European countries, including Ireland.

“We welcome development of political, cultural and scientific relations with Dublin,” he said.

The Iranian president further pointed to the Iran nuclear deal, officially known as JCPOA, as an international agreement endorsed by the United Nations Security Council, reminding the European Union, including Ireland, of their commitment to fully implement the accord and operationalise the INSTEX mechanism.

Rouhani also referred to his Hormuz Peace Endeavour (HOPE) initiative, and said, “The goal of the HOPE Coalition is to promote peace, stability and welfare and progress for all the peoples living in the Hormuz region.”

“This initiative encompasses many fields for cooperation, including energy security, freedom of navigation and free transport of oil and other resources for the countries of the region and beyond,” he said.

The Irish president, in turn, stated that his country is determined to develop relations with the Islamic Republic of Iran in all fields of mutual interest.

Higgins also emphasized that all parties to the JCPOA must be committed to the multilateral deal, which is beneficial for global peace.

In his Wednesday address to the UN General Assembly in New York, Rouhani invited all Persian Gulf countries to join the Coalition of HOPE (Hormuz Peace Endeavour), which he said is based on mutual respect, dialogue, respect for territorial integrity, peaceful resolution of all issues, and non-interference in each other’s internal affairs.