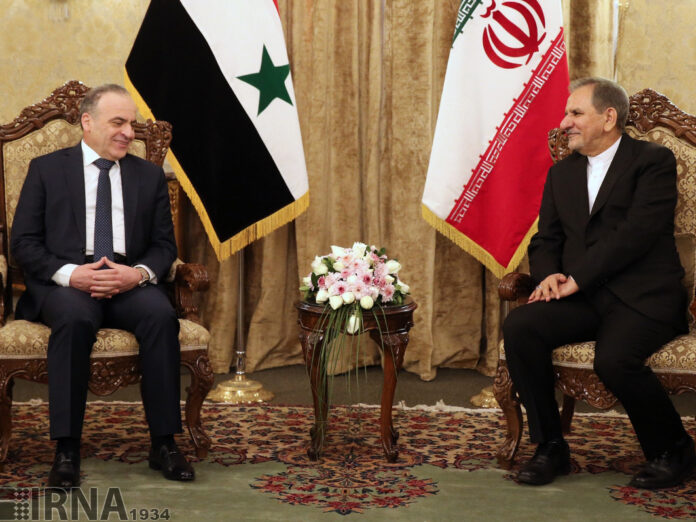 Iran’s First Vice President Es’haq Jahangiri says the victories earned on the battlefields in Syria are the result of coordination between the Arab country and the Islamic Republic as well as other important factors.

Jahangiri made the remark at a Tuesday press conference with Syria’s Prime Minister Imad Khamis, who has traveled to the Iranian capital, Tehran, at the head of a delegation.

“It is certain that Syria’s victories are owed to the gallantry and steadfastness of the Syrian people, army, the fighters of the resistance axis, and also the result of coordination on the field as well as political coordination between the country and Iran,” the Iranian official said.

“As the government and people of Iran, we have supported and assisted the Syrian people and legitimate government” in the face of terrorism, he added.

Last month, Syria retook its northwestern city of Aleppo from Takfiri terrorist groups in the biggest blow to the outfits and their foreign supporters since militancy began in the country in 2011. The victory was followed by the establishment of a ceasefire in the city, which was later expanded to the entire country. Iran and Russia coordinated efforts and talked to Turkey, which represented the militants, contributing to the achievements as a result.

Jahangiri said Damascus and the Syrian people had stood by the Iranian government and people during Iraq’s 1980-88 war on the Islamic Republic.

Both officials, meanwhile, hailed the efforts invested by the late founder of the Islamic Republic, Ayatollah Rouhollah Khomeni, and former Syrian President Hafiz Assad in establishing redefined bilateral relations between the two states after the 1979 victory of Iran’s Islamic Revolution.

Addressing the economic aspect of the visit, Jahangiri said the two sides signed five documents of cooperation in the fields of agriculture, mining, petroleum extraction, animal husbandry, and mobile communications.

An LoC was also opened for the export of Iranian commodities to Syria.

A sixth document will be signed in the near future enabling Iranian investment at one of Syria’s ports.

The Syrian official, for his part, said Iran and Syria were together in the fight against terrorism.

Khamis is to meet with Iran’s President Hassan Rouhani and Ali Shamkhani, the secretary of Iran’s Supreme National Security Council, later during his visit.