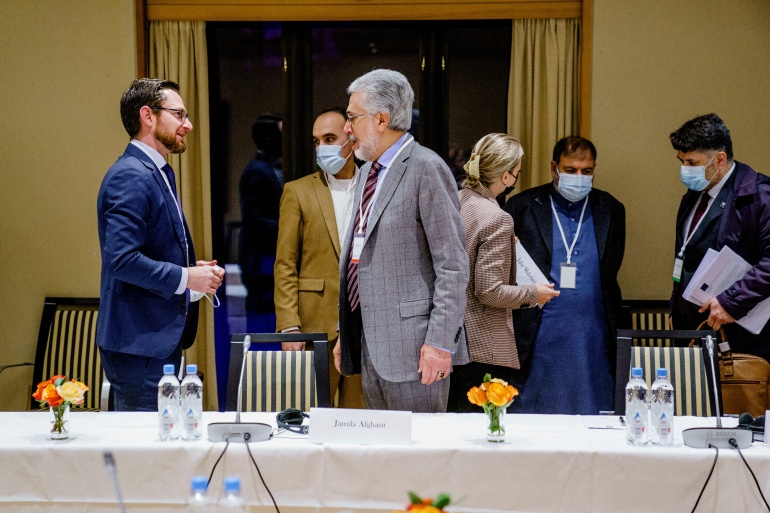 Taliban and Western diplomats are holding a meeting outside Norway’s capital Oslo. Talks are focusing on Afghanistan’s humanitarian crisis, which has escalated drastically since last August when the militants stormed back to power.

The closed-door discussions with representatives of the United States, France, Britain, Germany, Italy, the European Union and Norway are being held on Monday at the Soria Moria Hotel, on a snowy hilltop outside Oslo.

On Sunday, during the first day of the three-day talks, the Taliban met with Afghan civil society members, including women activists and journalists, for talks on human rights.

The Taliban “displayed goodwill … Let’s see what their actions will be, based on their words”, she said.

The 15 members of the all-male delegation arrived on Saturday on board a plane chartered by the Norwegian government.

The Taliban has been demanding that its assets of nearly $10bn held by the US be released and Afghanistan be linked to global trade.

International aid came to a halt following the Taliban’s return to power on August 15, worsening the plight of millions of people already suffering from hunger after severe droughts.

The freezing of Afghan central bank assets worth billions of dollars by the US and suspension of funds by international financial institutions have triggered a banking crisis and caused a near collapse of the Afghan economy.

“We are requesting them to unfreeze Afghan assets and not punish ordinary Afghans because of the political discourse,” Taliban delegate Shafiullah Azam told The Associated Press news agency, speaking at the end of the first day of talks.

“Because of the starvation, because of the deadly winter, I think it’s time for the international community to support Afghans, not punish them because of their political disputes,” he added.

He also stated the meetings with Western officials were “a step to legitimise (the) Afghan government”, noting that “this type of invitation and communication will help (the) European community, (the) US or many other countries to erase the wrong picture of the Afghan government”.

However, Norwegian Foreign Minister Anniken Huitfeldt earlier stressed that the talks were “not a legitimation or recognition of the Taliban”.

A US delegation, led by Special Representative for Afghanistan Tom West, plans to discuss “the formation of a representative political system; responses to the urgent humanitarian and economic crises; security and counterterrorism concerns; and human rights, especially education for girls and women”, according to a statement released by the US State Department.

On Sunday, 200 protesters gathered on an icy square in front of the Norwegian foreign ministry in Oslo to condemn the meetings with the Taliban, which have not received diplomatic recognition from any foreign government.

“The Taliban has not changed as some in the international community like to say,” said Ahman Yasir, a Norwegian Afghan living in Norway for about 20 years.

Fawzia Koofi, former deputy speaker of Afghanistan’s parliament who is also involved in negotiations with the Taliban, told Al Jazeera that the current talks only help consolidate the group’s power.

“In the situation where there is a lot of disunity and the political community of Afghanistan has not taken steps to unite and have a common position at the negotiation table, the talks will further weaken our position and further boost that of the Taliban,” she continued.

Meanwhile, Taliban spokesman Zabihullah Mujahid said in a tweet, “All Afghans need to work together for better political, economic and security outcomes.”

“The participants … recognised that understanding and joint cooperation are the only solutions,” he added.

Since sweeping to power in mid-August, the Taliban have imposed widespread restrictions, many of them directed at women, many of whom have been banned from certain jobs outside the health and education fields.

High school girls have been confined to their homes as schools have yet to be opened. Last week, the Taliban promised all girls will be able to return to school by end of March.

The Taliban have, however, stopped short of imposing a burqa ban, which was compulsory when they previously ruled Afghanistan in the 1990s.

The Taliban have been accused of targeting rights groups as well as journalists, in many cases detaining them.