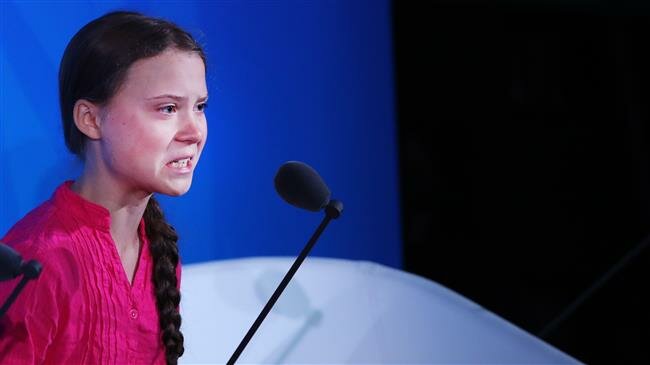 A teenage Swedish activist has rebuked world leaders at the UN Climate Action Summit for failure to take strong measures to combat climate crisis, accusing them of stealing her dreams with empty words.

Greta Thunberg, a 16-year-old climate change activist, opened the summit on Monday with an angry condemnation of world leaders for their inertia over the crisis and said they had stolen her childhood with “empty words.”

“You have stolen my dreams and my childhood with your empty words,” Thunberg said, adding that the plans that leaders intend to unveil will not be enough to respond to the rate of the planet’s warming.

Speaking before the packed room of world leaders, the Swedish activist said the generations that have polluted the most have burdened her and her generation with the extreme impacts of climate change.

“This is all wrong. I shouldn’t be up here. I should be back in school on the other side of the ocean yet you all come to us young people for hope. How dare you pretend that this can be solved with just business as usual and some technical solutions?” Thunberg said.

“People are suffering. People are dying. Entire ecosystems are collapsing. We are in the beginning of a mass extinction. And all you can talk about is money and fairy tales of eternal economic growth. How dare you!” she added.

The summit was convened by UN Secretary-General Antonio Guterres to push countries to go beyond their tepid climate change goals and do more to limit global warming.

In his remarks, Guterres was also blunt and said, “My generation has failed in its responsibility to protect the planet.”