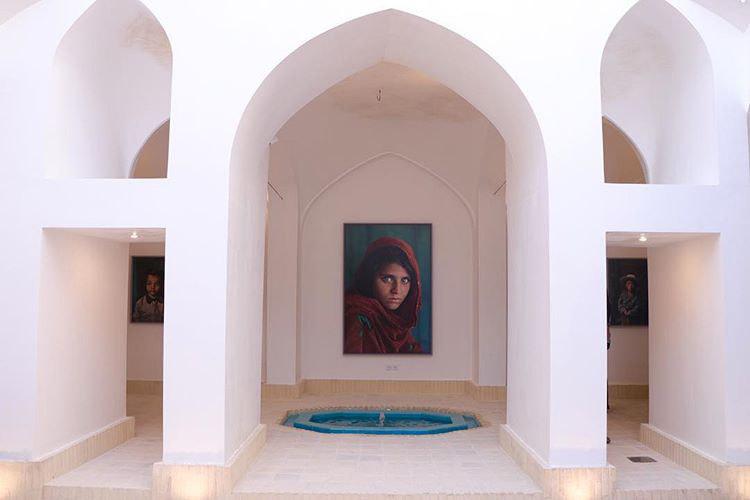 "Steve's House" has been opened in the Iranian city of Kashan as a bridge between the city's local architectural heritage and a large collection of famous American photographer Steve McCurry.

Founded by Hossein Farmani, an internationally renowned photographer, Steve’s house is a Qajar building that took about 10 months to repair. The house is built like a garden, with seven rooms and a pool house. Five rooms and the pool house are dedicated to displaying photographs. 240 photos, printed on fine art papers abroad, are displayed in three different sizes. The photos date back to 1980 and the latest ones are taken in 2012.

Next to the showroom, there is a library and a media room. Most of McCurry’s books could be seen in the library, and there are a number of photography and art books. Use of the entire space, library and media room is completely free of charge for all who come to Steve’s house.

Farmani is a photographer and collector who has gained international reputation for many years in various fields of art. He owns several galleries and is the founder of several world photography awards such as the Lucie Awards, IPA and PX3. He has studied photography in the United States. For a while he founded Vue magazine and then launched another magazine called Fotofoli. Ten years of work for one of the world’s largest publishers, Rizzoli, is also part of his career.

The founder of Lucie Awards has told Honaronline that “I set up a gallery in Los Angeles that is still going on. Its name is House of Lucie. I used to work in Los Angeles for a while, and then with a few of my friends, we started the Hollywood Awards Festival, which was the second-largest film festival in the US after the Oscars, picking the best films of the year. I told myself to do the same with photography. Until then, this had never happened in photography. In this way, Lucy Awards got underway. In 2003, the first Lucy Awards festival was held. The Lucy Awards festival is held every year at the Carnegie Hall in New York City. So far, Reza Daqati has won the award from Iran. We also hold four other photography festivals in Moscow, Paris, Tokyo and Budapest.”

Now, after years of working abroad, Farmani has returned to Iran and set up Steve’s House in Kashan.  About the way he set up this gallery in Kashan he says, “In fact I do not know Iran very well.  However, after 35 years, I had two 5-6 day trips to various cities of Iran. During these trips, my international friends accompanied me. Their love and interest in Iran made me pay more attention to Iran and especially Kashan. I was thinking of running a place to show photos in Kashan, and I was going to do it for my friend Steve McCurry. Steve is one of the world’s most well-known news photographers whose image of an Afghan girl is very famous. We found an old house in Kashan and after renovating it and creating a blend of modern and classic atmosphere it was turned it into a museum. We called it Steve’s House.”

Farmani says the house has not been officially opened yet. “Private opening ceremony of the house took place on June 13, 2019, but unfortunately he has not been able to come to Iran because of his visa problem. So we postponed the official opening of the place till he arrives in Kashan. Since the opening day, Steve’s House has been warmly welcomed by the people. On average 10 to 15 foreign tourists visit Steve’s House each day.”

He went on to add that some projects have already run at Steve’s house and young photographers come on a weekly basis to hold a series of meetings. “But the plan ahead for us is to give children of Hasht Cheshmeh region a short photography lesson. As Afghan immigrants live in this neighbourhood as well, I would like to offer them financial and spiritual support. I have high hopes for Kashan and I wish by bringing important people there, we could develop a better relationship between photographers and artists around the world. Of course, today there is a good opportunity for Iranian artists, and many galleries around the world are interested in showing Iranian artists’ works in their galleries.”