Slovenia president arrives in Iran for talks to enhance ties 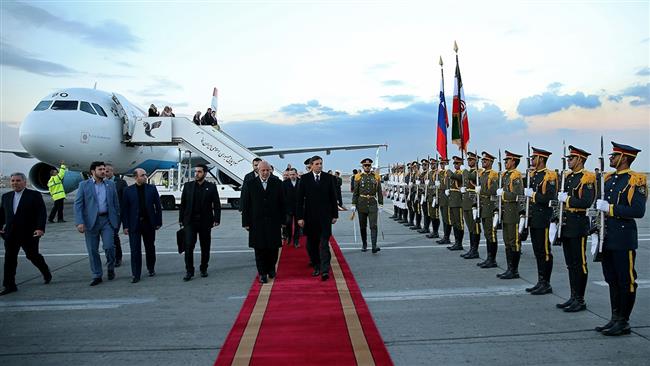 Slovenia's President Borut Pahor has arrived in Tehran to hold talks with senior Iranian officials on avenues to develop political and economic relations.

Heading a high-ranking politico-economic delegation, Pahor arrived in Tehran on Monday and was welcomed by Iran’s Energy Minister Hamid Chitchian upon his arrival at the Imam Khomeini International Airport.

Slovenia’s Minister of Foreign Affairs Karl Erjavec has said his country plans to reopen its embassy in Tehran in November.

During Pahor’s stay in Tehran, Slovenia’s embassy would be reopened, she added.

Slovenia’s Foreign Ministry announced in March 2013 that the country decided to shrink its diplomatic network as part of general austerity and close its embassy in Tehran in response to the difficult financial and economic situation in Slovenia.

However, Tehran and Ljubljana have been seeking to improve trade and economic cooperation along with political relations after the implementation of a nuclear agreement, known as the Joint Comprehensive Plan of Action (JCPOA), signed between Iran and the P5+1 group of countries in July 2015.

Iran and the five permanent members of the United Nations Security Council – the United States, France, Britain, Russia and China – plus Germany started implementing the JCPOA in January 2016.