Signs of divergence in a conference on convergence 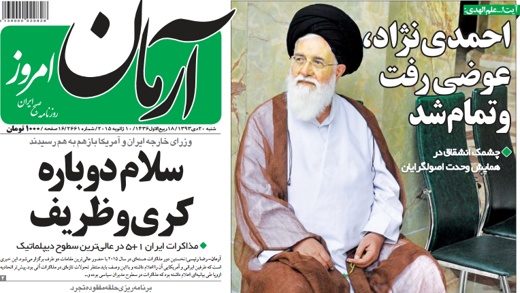 A reformist daily says a gathering which was originally meant to secure convergence among principlists seems to have revealed cracks in their ranks.

The gathering drew reformist and principlist reaction. The following is the translation of a report Arman-e Emrooz, a reformist daily, filed on the gathering:

The gathering which was originally meant to secure convergence among principlists seems to have revealed cracks in their ranks. Most of those who attended the gathering had failed in their bid to win elected office in recent elections and represented the Islamic Coalition Party, the Combatant Clergy Association, and the coalition of the Supporters of Imam and the Leader.

Tehran Mayor Mohammad Bagher Ghalibaf, who secured a sizeable number of votes in the 2013 elections, was one of the most prominent principlists conspicuous by his absence.

Saeed Jalili [a onetime secretary of the Supreme National Security Council and a presidential hopeful in 2013] and Kamran Bagheri Lankarani [a former health minister under Ahmadinejad] stayed away from the gathering too.

That Ayatollah Mohammad Taghi Mesbah Yazdi, who delivered the keynote speech at a previous such gathering, was absent was indicative of simmering tensions in the ranks of principlists. Mohsen Rezaei [a former commander of the Islamic Revolution Guard Corps] and his associates were no-shows too.

The most important principlists absent from the gathering were Ayatollah Movahedi Kermani, the secretary general of the Combatant Clergy Association, Ali Akbar Velayati, a 2013 presidential contender, and Parliament Speaker Ali Larijani.

Those who showed up

What was conspicuous in the gathering was the extensive presence of Ahmadinejad supporters. At a time when traditional principlists have no one to forge an alliance with, and infighting is brewing in their ranks, supporters of the former president seem to be perfect candidates to unite with.

When the organizers of the gathering set their sights on the long list of no-shows, they were swift to point a finger of blame at reformists.

For instance, Koohkan said identification of Ahmadinejad as a principlist is a ploy by reformists [to divide principlists]. It comes despite the fact that Ahmadinejad and his supporters have repeatedly said he is not part of the principlist camp.

What did those who showed up say?

In the wake of the gathering, in response to a question as to why Mousavi and Karroubi [two presidential candidates who disputed the results of the 2009 vote and sparked widespread unrest] are not tried, Ayatollah Ahmad Alam al-Hoda told reporters, “You cannot ask for your own trial. Trial comes after prosecutors issue an indictment. Individuals cannot ask for a trial. These individuals are accused of committing offenses. The accused never appeal for their trial.

“Whenever the Supreme National Security Council agreed to prosecution and the judiciary chief ordered a trial in their case, they would be put on trial. They need to be interrogated.”

Before that, Seyyed Reza Taghavi told the gathering failure to get together for such meetings is not the proper way to get things done. Shunning others creates hurdles.