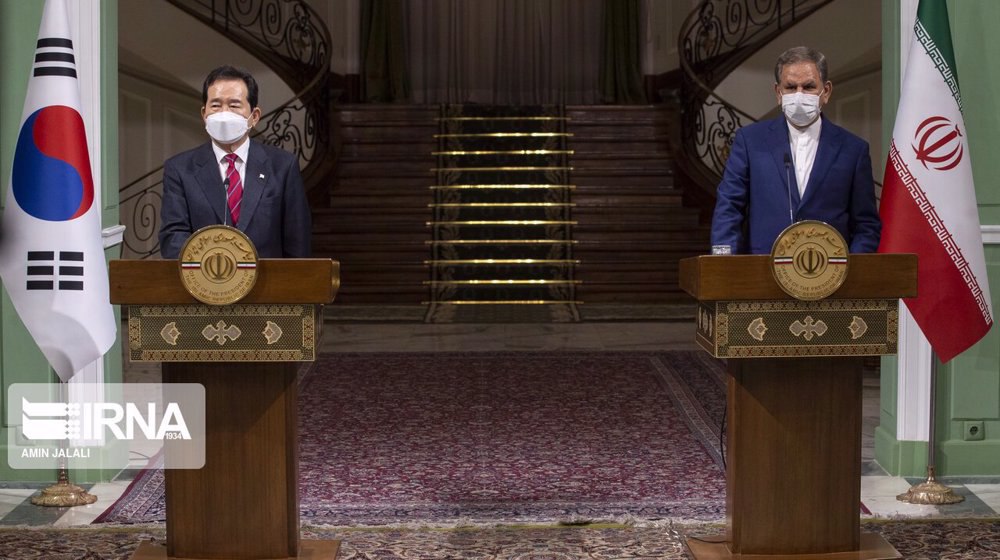 Es’haq Jahangiri made the remarks in a joint press conference with the visiting South Korean Prime Minister Chung Sye-Kyun in Tehran on Sunday.

“The measure taken by South Korean banks to block Iran’s foreign exchange assets has marred the image of South Korea among the Iranian people,” Iran’s VP said, adding, “We want the South Korean government to unblock Iran’s assets in the shortest time possible and make up for the problems it has caused in recent years.”

“Unfortunately, during the past three years, South Korea has followed suit with US illegal sanctions against Iran, which lack any international legitimacy, as a result of which, relations between the two countries have become stagnant,” Jahangiri said.

He added, “The decline in relations between Iran and South Korea took place at the time that there were no international sanctions, including the United Nations’ sanctions, against Iran,” he added.

The mutual relations have been seriously strained by the South Korean banks’ move to freeze some seven billion dollars of Iran’s foreign exchanges resulting from the legal sale of its oil and gas condensates to this country, he said.

“The move by the South Korean banks to block Iran’s foreign resources took place at a time that the Iranian people are in dire need of them due to the coronavirus pandemic and its economic and health consequences. This measure by Koreans has deprived the Iranian government of major foreign exchange resources it needs to buy medical equipment, medicine and other essential goods for the country,” Iran’s vice president said.

Jahangiri expressed hope that South Korea would take proper steps to improve its position in Iran, saying that the Iranian government is ready to help Seoul make up for its past mistakes if it takes “effective and tangible” steps in this regard.

For his part, the South Korean prime minister said Tehran and Seoul have agreed to work on ways to expand mutual relations and make decisions to boost cooperation in the fight against the COVID-19.

Chung added that South Korea will increase dispatch of humanitarian aid, including medicines and medical equipment, to Iran via the two countries’ working group, expressing hope that it would be useful for the Iranian people.

The two countries would also resume an academic program to exchange medical experts and hold professional training courses, which had previously played a leading role in boosting relations between the two nations, he noted.

The South Korean prime minister noted that the two countries will make efforts to strengthen cooperation at a faster pace in parallel to their endeavor to revive the multilateral nuclear deal signed between Tehran and world powers in 2015, officially known as the Joint Comprehensive Plan of Action (JCPOA).

Iran is struggling to return the funds frozen by South Korean banks amid a shortage of hard currency in the country which has been contending with the coronavirus pandemic over the past year.

Several billions of dollars of Iran’s money, mostly from oil and gas exports, are held abroad and are difficult to access because of tightening US sanctions in recent years.

About $2.7 billion deposited by the Seoul branch of Iran’s Bank Mellat is held by the Bank of Korea, while more than $7 billion worth of Iranian oil money is stuck at the Industrial Bank of Korea and Woori Bank, according to Yonhap news agency. South Korea’s refusal to free them has turned to a diplomatic spat.

The South Korean prime minister arrived in Tehran earlier on Sunday for talks with senior Iranian officials on bilateral issues, particularly the release of the frozen funds.