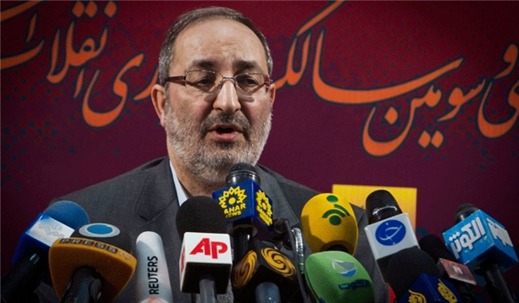 Deputy Chief of Staff of the Iranian Armed Forces Brigadier General Massoud Jazzayeri underlined that the country will never allow its missile and defensive capabilities to become an issue for talks between Tehran and the world powers.

“Iran’s missile programs and defensive capabilities are not negotiable in any foreign circle, irrespective of their approach,” Jazzayeri said in reaction to the Monday remarks of US State Department Spokeswoman Jen Psaki who voiced concern about the launch of a new Iranian satellite and claimed that Tehran’s missile program is a part of the ongoing nuclear negotiations between Iran and six world powers.

“We don’t allow the US and others to meddle in Iran’s defensive affairs,” he added.

Stressing that Iran will use its defensive capability against the bullying powers whenever necessary, Jazzayeri said if the US embarks on any aggressive move, it would face Iranian missiles.

“The era of the US being a superpower has ended, but some have not realized it yet,” he underlined.

In relevant remarks on Tuesday, senior Iranian negotiator and Deputy Foreign Minister Seyed Abbas Araqchi stressed that the rocket carrier used to send Iran’s new satellite into orbit has been designed and used for completely scientific purposes, adding that the country would never allow its missile industry, which is used for defensive purposes, to become an agenda for Iran-powers talks.

“The ‘Safir (Messenger)’ rocket which carried the Fajr satellite into the orbit (on Monday) has been designed and built by the capable hands of experts at the defense ministry’s aerospace organization for space missions and in pursuit of fully peaceful goals,” Araqchi said.

“Iran’s missile program is fully defensive in nature and the Islamic Republic of Iran believes that its defensive issues are not negotiable at all and it will not discuss this issue with any foreign side,” Araqchi stressed.

“Hence, raising and negotiating the country’s defensive and missile capability in Iran’s nuclear talks with the Group 5+1 (the US, Russia, China, Britain and France plus Germany) has never been allowed in the past nor at present nor in future,” he added.

Iranian officials have on different occasions underscored that the country’s missile program is non-negotiable, stressing that the talks with the six world powers are limited to the nuclear standoff.

In relevant remarks in August, Iranian President Hassan Rouhani stressed that Iran’s military program was based on a defensive doctrine, but meantime said Tehran would never ask for anyone’s permission for defending itself and expanding its defense industries, implying that the nation would not discuss its missile program in talks with the world powers.

“Our military doctrine is based on defense and we don’t design any weapon for aggression; we don’t carry out any research on how to occupy the regional states. All our researches are based on this defense principle that how we can defend ourselves or how we can stop the enemy,” Rouhani said, addressing a ceremony to unveil two new home-made cruise missiles and two new drones in Tehran participated by Defense Minister Brigadier General Hossein Dehqan and other senior officials at the time.

He said Iran’s defense programs were based on a deterrence strategy to prevent the breaking out of war in the region, reiterating that “our military capability is at the service of regional security”.

He underscored Iran’s strategy of preventing war in the region, and said Tehran is not after an arms race and the Weapons of Mass Destruction (WMDs) “but it doesn’t ask for anyone’s permission to defend itself and to develop our defense industries to whatever degree” that we deem necessary.

The President once again reiterated the necessity for creation of a nuclear weapons-free Middle-East, saying that all WMDs in the Middle-East should be dismantled.