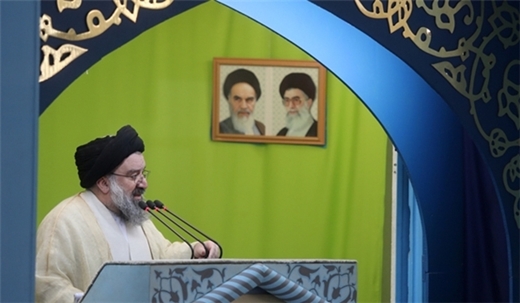 The recent US bill on forming three separate Shiite, Sunni and Kurd states in Iraq is a dream which won’t come true, because the Iraqi nation is well aware of the plot, said Ahmad Khatami.

Addressing a large congregation of people on Tehran University campus on Friday, Ayatollah Khatami said, “The recent US bill on the Iraqis and forming three separate Shiite, Sunni and Kurd states is a dream that God willing will not come true, because the Iraqi nation is well aware of that plot and will stand against it.”

He termed the bill as another attempt to interfere in Iraq’s internal affairs.

In March 2015, the US Congress introduced legislation that would allocate military aid directly to the Kurdish Peshmerga fighters and Sunni tribesmen.

In a press release, Al-Abadi said that the Iraqi government strongly opposed the bill.

“The bill proposed by the Senate Foreign Relations Committee is opposed (by the Iraqi government), as it leads to further divisions in the region,” Al-Abadi said.

“We call on the US Congress not to go through with the bill to preserve strategic relations between the two countries (the United States and Iraq) in fighting the Islamic State (of Iraq and the Levant) terrorist organization and reinforcing cooperation between them,” Al-Abadi added.

The Iraqi Prime Minister noted that the countries working alongside Baghdad in combatting the ISIL have respected Iraq’s sovereignty, and stressed that nobody will receive weapons without the consent of the central government.

“There is no double dealing with the outside parties… We stress that arming any group will not occur unless via the Iraqi government, in accordance with its military plans,” Al-Abadi added.

On Sunday, Iraqi Parliament issued a statement rejecting the bill, and reiterated its support for a unified Iraq.

Yet, senior parliamentary officials in Baghdad disclosed on Tuesday that Germany has sent 70 tons of weapons to the Iraqi Kurds in the city of Erbil without any coordination with the country’s central government in Baghdad, a move seen as part of the Western states’ plan for disintegrating Iraq through undermining Baghdad’s authority.

The move by the German government takes place at a time when the Iraqi Parliament voiced strong opposition to a bill proposed by the US Congress that allows the Kurdish forces and the Sunni tribesmen to be armed directly, bypassing Iraq’s central government.

Al-Jabouri noted that the arms cargo arrived in Iraqi Kurdistan region on Monday, and said, “The German government’s move has been made in violation of the Iraqi parliament’s rejection of any foreign interference in the country’s internal affairs or interaction with Iraqi political groups without prior coordination with the Federal government.”