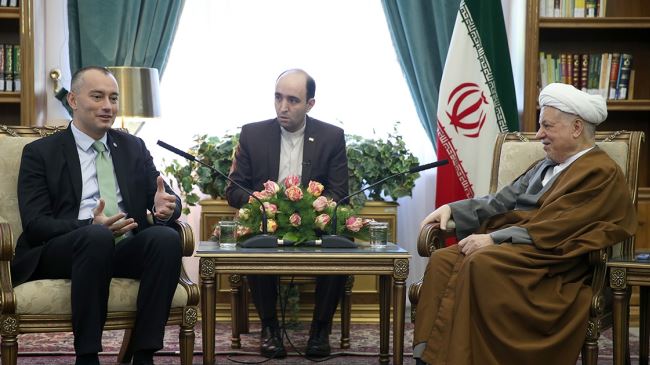 Former Iranian president Hashemi Rafsanjani tells a UN envoy in order to take on terrorism a comprehensive plan which heeds the needs of all political and social strata is needed.

Chairman of Iran’s Expediency Council Akbar Hashemi Rafsanjani has warned about plots by colonial powers and authoritarian regimes to use sectarian rifts as a means of creating insecurity.

In a meeting Monday with UN Special Envoy to Iraq Nikolay Mladenov, Mr. Rafsanjani said, “Unfortunately, dictatorships, colonialism and terrorism provoke the people to create insecurity by capitalizing on [their] sectarian and religious differences.”

He pointed to the role of authoritarianism and colonialism in the creation of terrorism and noted, “As long as these two factors exit, terrorists will be around and they even grow more in such an environment.”

The veteran politician argued that countering terrorism requires a comprehensive plan and taking heed of all political and social strata, adding, “The presence of ISIL in Iraq is not permanent, but planning is needed to prevent the infiltration of this ideology and similar deviant thoughts.”

Rafsanjani underlined the need for tackling terrorism at its root as an intrinsic responsibility of the UN and pointed out that the aim can be achieved by showing real respect for human rights and avoiding discrimination and politicization of issues.

Mladenov, for his part, noted that, contrary to the existing claims, ISIL can be defeated very easily through military means, as the group has no popularity among the public.

He called for efforts to bridge the sectarian and religious rifts in Iraq and noted that the Iraqi National Guard should be deployed across the country’s provinces and borders to tighten the noose on terrorists.

The extremist group has threatened all communities, including Shias, Sunnis, Kurds and Christians, during its advances in the violence-torn state.