Seattle can help America and Iran learn to build trust 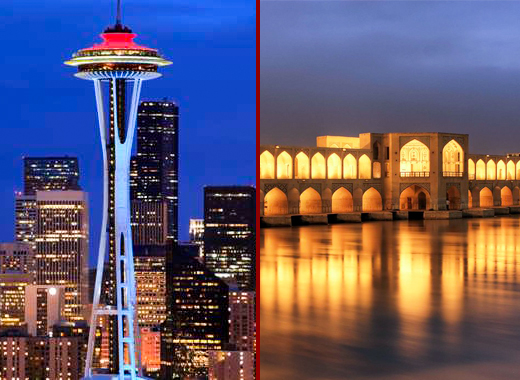 An American daily has said Seattle and Isfahan can develop a sister-city relationship to help the US and Iran build trust after decades of hostility and distrust.

Selection and publication of materials from a non-Iranian newspaper or magazine is not what IFP pursues as part of its mission. But there is always an exception to the rule. Fararu, an Iranian news website, on June 14 published the Farsi translation of a piece by Frederick L. Noland, an American columnist at the Seattle Times on the sister-city relationship between Seattle – a coastal seaport city in the US state of Washington with an estimated 668,000 residents – and the Iranian city of Isfahan. IFP publishes part of the original text of the Times whose Farsi version was released by Fararu.ir.

A sister-city relationship would build new ties with the Iranian people.

In April, 15 Americans met and talked with hundreds of ordinary Iranians as we traveled to Iran’s most important cities and several remote areas.

In the beautiful and historic city of Isfahan, where I had taught at Isfahan University as a Peace Corps volunteer in 1966-67, I spoke with a key city official about creating a sister-city relationship with Seattle to facilitate exchanges of musicians, artists, students, teachers, secular and religious leaders, and, importantly, businesspeople.

The proposal is modeled on Seattle’s highly successful sister-city relationship established during the Cold War with Tashkent, the then-capital of the Soviet satellite state Uzbekistan. The Isfahan city official’s response was very positive, but clearly dependent on the outcome of the present nuclear negotiations at the national level.

The ignorance of many Americans about the roots of our conflict with Iran has made it easy for demagogues and politicians, both in the United States and abroad, to pursue their agendas by slanting the truth.

Most Americans know that students seized our embassy in Tehran, Iran, in 1979 and held its staff hostage for 444 days. They also know of the Iranian government’s support of the Hezbollah group in Lebanon and the Assad regime in Syria, the denial of the Holocaust and threats against Israel by former President Mahmoud Ahmadinejad, and the imprisonment of American citizens on espionage charges.

Sadly, few Americans are aware of Iran’s grievances against the United States, including the CIA’s role in the overthrow of Iran’s first democratically elected prime minister and in bringing Shah Mohammad Reza Pahlavi back from exile in 1953, our training of the shah’s secret police, and our Navy’s shooting down of an Iranian civilian airliner in 1988, killing all 290 aboard, including 66 children.

Also easily forgotten by Americans is US support for Saddam Hussein in the eight-year Iran-Iraq war […]. So deep is Iranian suspicion about American intrigues […].

Despite years of hostility and suspicion between our countries, the most extraordinary thing about traveling in Iran as an American is how often ordinary Iranians expressed respect and affection for the American people. During our three weeks traveling throughout Iran, not an hour went by without Iranians telling us, “We love Americans.” They asked if they could pose for pictures with us, asked how we liked Iran and told us how much they hope a normal relationship with the West can be nurtured.

The United States has spent an estimated $4 trillion to $6 trillion waging wars in Iraq and Afghanistan, supporting “regime change” in Libya and, recently, assisting Saudi Arabia in its bombing campaign in Yemen. Tragically, our bombs, bullets and drones have left us with few loyal friends and many bitter enemies. Those who seek to undermine the present chance for positive change in US-Iranian relations offer no alternative but perpetual hostility and war. Coincidentally, the reluctance of Congress to embrace an opportunity to normalize relations with Iran comes at the very time when our interests in confronting the Islamic State and other terrorist threats could be aligned with Iran’s.

Please join in urging the congressional “hawks” of both parties to stop undermining the hard work of our diplomats and to “give peace a chance.” And urge Seattle’s citizens, mayor and City Council to develop a sister-city relationship with Isfahan that could promote mutual respect between our countries and reduce the risk of fruitless military confrontation.