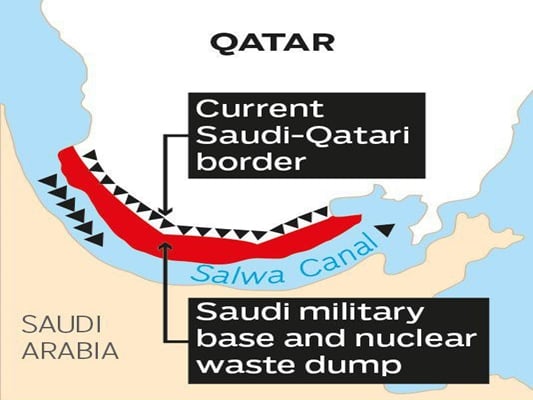 Saudi Arabia is sacrificing a portion of its territory and spending nearly $750 million to dig a 60-kilometre canal that will turn Qatar into an island.

June 25 is the deadline set by Riyadh for accepting tenders to dig the waterway alongside Saudi-Qatari border, which is to be completed within 15 months.

Five international companies with expertise in digging canals have so far submitted their tenders for the Salwa canal inside the territory of Saudi Arabia and alongside the Saudi-Qatari borders. The name of the winner will be announced within 90 days and the company will have one year to complete the task, Saudi daily Makkah has reported.

The canal will be inside Saudi territory, making it fully Saudi, and will be about one kilometre from the official border with Qatar, the Gulf News reported.

The project will be reportedly funded fully by Saudi and UAE private investors and that Egyptian companies with expertise in digging would help with the construction of the canal.

A Saudi military base will be established in the one kilometre separating the Salwa waterway from Qatar, while the remainder will be converted into a waste dump for the Saudi nuclear reactor, which Riyadh plans to build.

In April, Saudi border guards took control of the Salwa crossing, effectively cutting off Qatar’s only terrestrial link with the outside world.

The customs and passports departments evacuated the crossing and handed over its control to the Border Guards, shortly after orders had been given to station them along the borders.

The move was understood to signify that work on the ambitious project to dig the waterway would start earlier than predicted.

Saudi Arabia, Bahrain, the UAE and Egypt on June 5, 2017, severed their diplomatic, trade and travel ties with Qatar, accusing it of supporting extremists and funding terrorism.

The Quartet issued a list of 13 demands and asked Qatar to comply with them in order to restore ties.

However, Doha rejected the points. Mediation efforts led by fellow Persian Gulf Cooperation Council (GCC) member Kuwait have so far failed to achieve a breakthrough or any incremental progress.