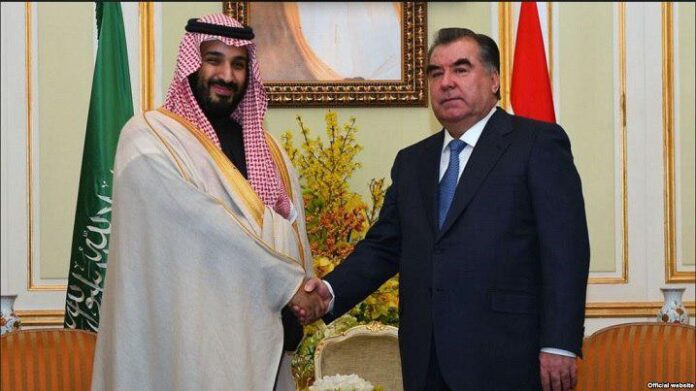 Riyadh is trying to foment discord between Iran and Tajikistan as their cold ties will create favourable conditions for Saudi Arabia to turn the Central Asian state into a breeding ground for advocates of a radical interpretation of Islam.

The Persian-language Mehr News Agency has, in a recent report, argued that attempts by Iran’s regional rival, Saudi Arabia, to sabotage relations between Tehran and Dushanbe and cash in on their estrangement have contributed to straining relations between the two countries.

During a trip to Saudi Arabia in 2016, Tajik President Emomali Rahmon received loans and financial aid from the Saudi government in what many believed were Riyadh’s attempts to pry a good ally away from Iran, the article said.

However, the article said the Tajik government must show vigilance towards the Saudis, as Riyadh’s assistance could have ulterior motives.

It said a pledge by Riyadh in 2017 to provide $35 million for construction of schools in Tajikistan is aimed at propagating an extremist mind-set among the youth in the Persian-speaking and predominantly Muslim state.

The Tajik government should fight a rearguard action against such efforts if it wants to prevent the country from turning into a breeding ground for advocates of a radical interpretation of Islam, it suggested.

The article said providing the Central Asian country with financial aid gives Saudi Arabia ample room for manoeuvre, setting up a situation ripe for the rise of extremism.

“Cold relations between Iran and Tajikistan, which share common cultural heritage, will create favourable conditions for Saudi Arabia and Takfiri groups that will definitely pose a great security challenge to Tajikistan,” the article said.

Takfiris are hardliners who accuse Muslims that do not follow their extreme interpretation of Islam of apostasy punishable by death.

But ties between the two nations have been strained since a leader of a banned Tajik Islamist party, Islamic Renaissance Party, attended a conference in Tehran in 2015, which angered the government in Dushanbe.

The Rahmon administration accused the Islamic Renaissance Party of Tajikistan of being behind a failed coup attempt in September 2015 and later banned the party, jailing some of its leaders and activists.

Last year, Tajikistan accused Iran of intervening in the 1990s Tajik civil war, sending assassins and saboteurs into the former Soviet republic, which worsened the situation in the country, the article said.

The article said that the shuttering of several Iranian centres in the country at the request of Tajik authorities and their decision to slap travel and trade restrictions on citizens and goods from Iran in recent years contributed to the souring in relations.

Another irritant has been the fate of the assets of jailed Iranian billionaire Babak Zanjani, whose international business empire once included assets in Tajikistan, the article added.

Zarif’s Tajikistan Trip Could Pave Way for Thaw in Ties

Iranian Foreign Minister Mohammad Javad Zarif was in Dushanbe last week, where he held talks with President Rahmon in the Central Asian country.

In the meeting, held on the sidelines of the 23rd ECO Ministerial Meeting held on April 17, the two sides exchanged views on bilateral, regional and international issues, stressing the need to forge closer cooperation in different fields.

The meeting, described as “friendly”, was the second meeting between Zarif and Rahmon within the past few months.

Earlier in November 2017, the Iranian top diplomat had made a trip to the Central Asian country as the first of its kind in the past couple of years.

Mehr News Agency’s report further wrote that the trip could open a new chapter in bilateral ties if accompanied by concrete steps.

“Improvement of Iran-Tajikistan relations, which was pursued in the foreign minister’s recent trip, requires more fundamental and considerable measures so that the two countries that share a common language could get closer to each other,” read the article.