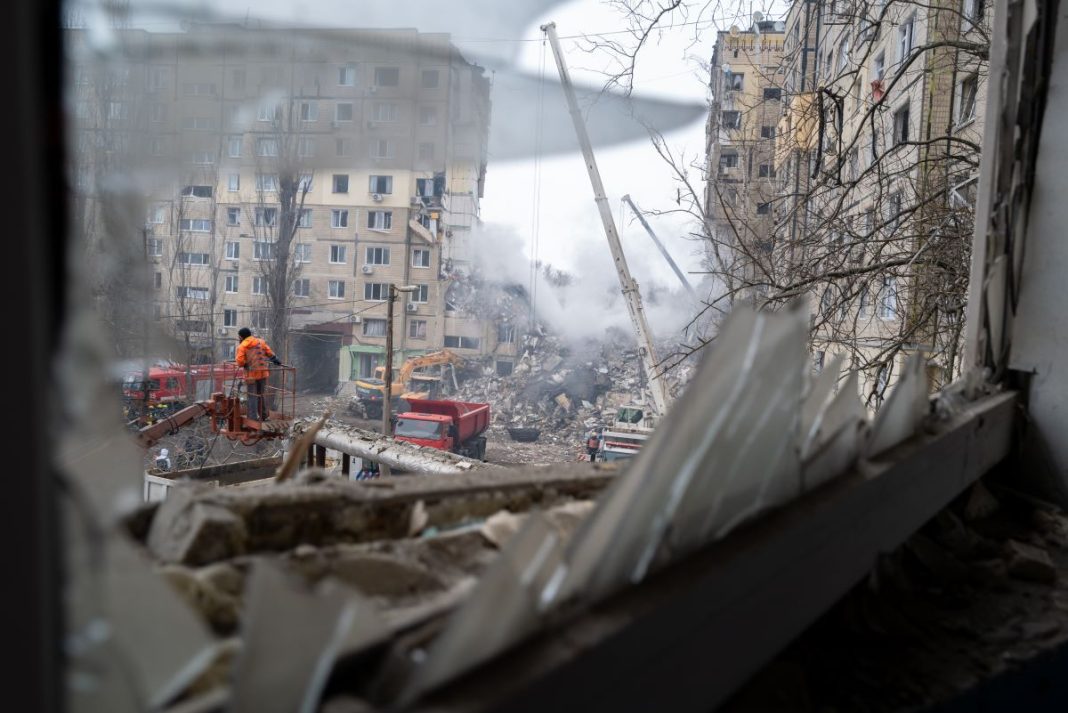 The Russian strike on a residential building in the Ukrainian city of Dnipro has killed 40 people, according to an updated death toll from the Ukrainian emergency services.

In a Telegram update on Monday the emergency services agency said that 40 people, including three children, had died.

In addition, 39 people have been rescued, 75 were injured and 46 are still reported missing.

The building was hit on Saturday, and a Russian Kh-22 missile was used in the attack, the Air Force Command of the Ukrainian Armed forces announced Sunday.

Originally designed as an anti-ship missile, the Kh-22 is an older and less accurate weapon than most modern missiles.

Ukraine insists its forces are still battling to hold the town of Soledar, in Donetsk region, with street fighting raging and Russian forces advancing from various directions.

“Everything else is unverified information,” Maliar added.

India is hopeful that rupee trade with Russia will pick up after the two sides spoke about facilitating transactions in local currencies, an Indian trade ministry official said.

India has been exploring a rupee trade settlement mechanism with Russia since soon after Moscow invaded Ukraine in February, but the countries have not formalised the rules yet.

But India is looking to enhance exports of electronic items to Russia, Satya Srinivas, a secretary at the trade ministry, told reporters in New Delhi.

The two countries are engaging “at all levels” to resolve issues related to trade barriers and a payments mechanism, he added.

Polish Prime Minister Mateusz Morawiecki said Germany should send Ukraine all the weapons it needs, including tanks, to defend itself against Russia.

“I call for decisive actions by the German government,” he stated, to applause from gathered, mostly conservative, German legislators.

“For all sorts of weapons to be delivered. The battle for freedom and our future is raging as we speak… Tanks must not be left in storehouses, but placed in their hands,” he added.

Following a first meeting of EU representatives to coordinate the planned purchases, Sefcovic said that he had urged member states to swiftly engage with key market players in their countries to estimate the volumes of gas needed to fill storages before the following winter.

Sefcovic said that the Commission aims to publish the aggregate demand to attract buyers in early spring.

The death toll from a Russian missile strike on an apartment block in the Ukrainian city of Dnipro has risen to 36, including two children, according to Ukraine’s National Police.

“The debris of a high-rise building hit by a Russian missile continues to be dismantled in Dnipro,” the police said on Telegram Monday, adding that 75 people were injured in the strike.

Search and rescue operations continue and 39 people have been rescued so far.

Also on Monday, Kremlin spokesman Dmitry Peskov noted that the strike was the result of counter-missiles and air defense.

In response to a question about the strike, Peskov stated the Russian Armed Forces only strike “against military targets, whether they are obvious or disguised,” and not at residential buildings.

Prime Minister Denys Shmyhal wrote on Twitter, “Ukraine and the EU have just signed a Memorandum of Understanding on the provision of 18 billion (euros) in macro-financial assistance.”

“We expect to receive a tranche of 3 billion euros this week. Many thanks to Ursula von der Leyen and Valdis Dombrovskis. This will help maintain macroeconomic stability going forward,” he added.

The EU reached an agreement to provide 18 billion euros in financing to Ukraine at a summit last month as Russia presses on with its invasion of Ukraine.

Germany’s Defence Minister Christine Lambrecht has offered her resignation to Chancellor Olaf Scholz, according to a statement seen by the German news agency, DPA.

Lambrecht has come under fire over her ability to deliver arms to Ukraine and the huge reinvestment into the armed forces.

A New Year’s Eve message posted to Instagram sparked controversy as Lambrecht discussed Russia’s invasion of Ukraine while fireworks exploded behind her.

Many said the video was ‘tone-deaf’ and called on Scholz to dismiss the minister.

But speculation over a possible resignation grew significantly in the past week.

On Monday, Lambrecht said the “months-long media focus on me personally” had not allowed for a proper public debate about the role of the armed forces and German security policy.

“I have therefore decided to vacate my position,” Lambrecht added.

Around 60 percent of Germans surveyed wanted to see Lambrecht resign, according to an opinion poll from public broadcaster ZDF released on Friday.

Half of the polled voters who support her Social Democratic Party (SPD) also said she should resign.

The Kremlin says that the tanks Britain plans to send to Ukraine “will burn”.

On Saturday, Britain announced it would send 14 of its Challenger 2 main battle tanks and other advanced artillery support in the coming weeks.

“They are using this country as a tool to achieve their anti-Russian goals,” Kremlin spokesman Dmitry Peskov stated.

“These tanks are burning and will burn just like the rest,” Peskov continued, adding that new supplies from countries like Britain and Poland will not change the situation on the ground.

In his nightly address Sunday, Ukraine’s president addressed the devastating Russian missile strike on an apartment building in the central city of Dnipro.

“Dozens of people were rescued from the rubble, including six children,” Volodymyr Zelensky said.

“We are fighting for every person. The rescue operation will last as long as there is even the slightest chance to save lives,” he continued.

“There are reports that two children lost their parents,” the president added.

A regional leader stated earlier Sunday that the death toll has risen to 30 in the missile strike, with another 75 people hospitalized.

The cold and densely packed wreckage of the building suggested hopes of finding anyone else alive were diminishing. But dozens of emergency service workers remained at the scene some 30 hours after the blast.

Zelensky also noted on Sunday that a decision was made “to expand our sanctions against Russian citizens and other persons who help terror.”

“We will do everything to make the sanctions work on the largest possible scale — in Europe, in the world,” he stated.

He did not specify the actions further.

Battle for Soledar continues “without any respite, without any stop”: Ukraine

The fight for the embattled eastern town of Soledar is ongoing, Ukrainian President Volodymyr Zelensky said in his nightly address Sunday.

“The battle for Soledar, for Bakhmut, for the whole Donetsk region, for the Luhansk region continues without any respite, without any stop,” Zelensky stated, referring to eastern territories that have seen some of the conflict’s fiercest fighting.

Russia claims its forces have taken Soledar after weeks of brutal clashes, which Kyiv has denied. The leader of the Wagner mercenary group has taken credit for the bulk of the fighting on Moscow’s side and claimed victory there, as well.

NATO chief: More heavy weapons for Ukraine ‘in the near future’

“The recent pledges for heavy warfare equipment are important, and I expect more in the near future,” Stoltenberg stated ahead of a meeting this week of the Ukraine Defense Contact Group, which coordinates arms supplies to Kyiv, at Ramstein Air Base in Germany.

On Sunday, the premises of a local Red Cross facility, a rehabilitation center for children with disabilities, an area surrounding a student dormitory, as well as a critical infrastructure facility came under fire, Yaroslav Yanushevych, the head of Kherson’s military administration wrote on Telegram.

According to the official, Russian shelling caused a fire to break out on the premises of the Red Cross facility.

“Rescuers are currently working to eliminate the fire,” he added.

Yanushevych reported that windows and doors were blown out as a result of a Russian strike on the rehabilitation center for children with disabilities.

He stated that at least seven people were injured in the Russian shelling of Kherson city, with one of them in a serious condition.

The city of Kherson was freed from Russian occupation in Nov. 2022.

A fire broke out early Sunday in a cultural center in a rural area of Belgorod, which led to the explosion of ammunition stored inside, according to TASS.

The state media reported earlier that at least 10 Russian soldiers were injured in the blast. It’s not clear if any servicemen were among those killed.

The regional governor’s adviser, Natalia Babachenko, has said 30 people were confirmed dead so far after an apartment building complex in the city of Dnipro was hit during a major Russian missile attack.

More than 30 were in hospital, including 12 in a serious condition, Babachenko stated.

Between 30 to 40 people could still be trapped under debris, she added.

In Dnipro, workers used a crane as they tried to rescue people trapped on the upper floors of an apartment tower where about 1,700 were living. Some residents signalled for help with lights on their mobile phones.

Ivan Garnuk was in his apartment when the building was hit and said he felt lucky to have survived. He described his shock that the Russians would strike a residential building with no strategic value.

Germany: Russians responsible for war crimes in Ukraine ‘must be held accountable’

The German ministry of defence has said Russia’s leaders and forces responsible for war crimes in Ukraine “must be held accountable”.

Germany’s Foreign Affairs Minister Annalena Baerbock will be travelling to the Hague, it added.

Sweden must extradite terrorists if wants to join NATO: Turkey

Turkey on Sunday criticized Sweden along with other European states over tolerating a continuing terrorist presence, as the country’s president said the extradition of terrorists is a must for the Nordic country to earn the right to enter NATO.

“We’ve told them (Sweden), ‘Look, if you don’t extradite the terrorists you have then we can’t ratify this (NATO membership) in our parliament’,” Recep Tayyip Erdogan told a youth meeting, referring to Sweden and Finland’s pledges last June to take a firm stance against terrorists in order to gain NATO membership.

“First of all, they need to extradite nearly 130 terrorists in order for their bids to pass our parliament, (but) unfortunately they have yet to do this,” he added.

“Interestingly, their court rejected the deportation of Bulent Kenes to us,” Erdogan noted.