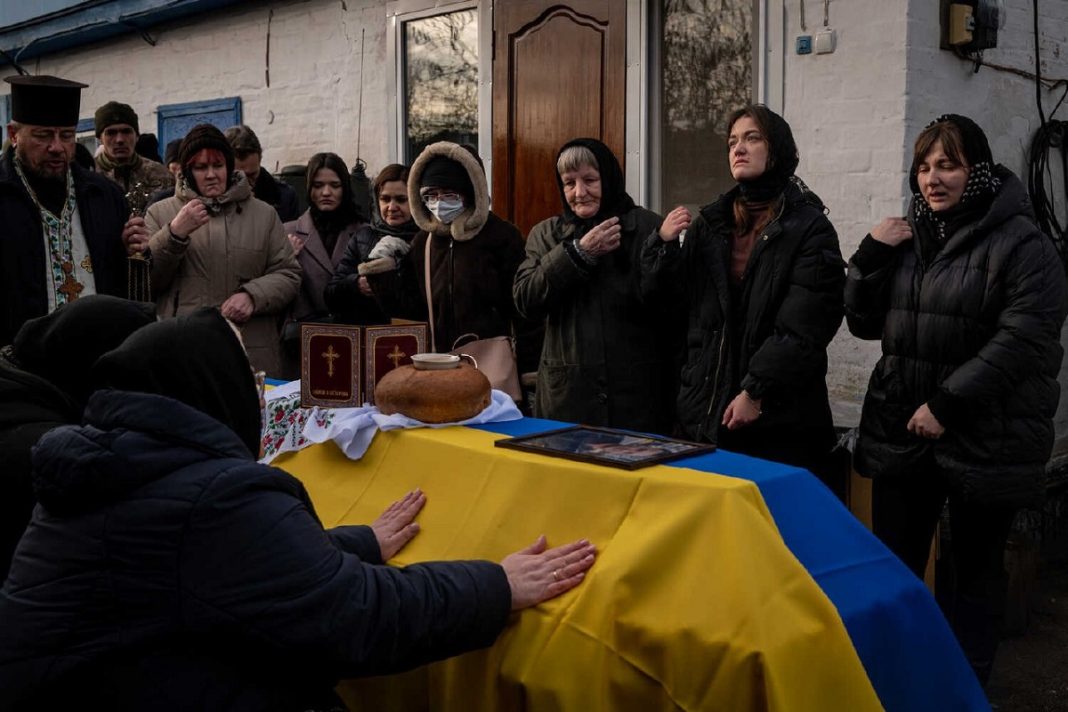 Russian President Vladimir Putin has stated that Moscow will not allow the West to use Ukrainian people in order to weaken Russia.

“The West is using the people of Ukraine to split Russia and weaken it; we will never let it happen,” Putin said during his New Year address to the nation on Saturday.

He also stressed that “moral, historical rightness” is on Russia’s side.

The remarks come after the Russian president pointed out last week that Moscow is open to a dialogue with all the sides on the peaceful settlement of the conflict in Ukraine, but that they have so far refused to negotiate.

“The policies of our geopolitical opponents, aimed at splitting up Russia, are at the roots of the Ukrainian conflict,” Putin added.

Referring to Moscow’s ongoing special operation in Ukraine, Putin underscored that Russia is doing the right thing there.

“I think we are acting in the right direction: we are protecting our national interests, the interests of our citizens, our people. And we just have no choice but to protect our citizens,” he underlined.

This was preceded by Putin emphasizing earlier this month that “the only real guarantor of Ukraine’s sovereignty and territorial integrity in its current borders could be Russia.”

One person has been confirmed dead so far after Russia launched a series of missile strikes on Ukraine, including on Kyiv.

Kyiv mayor Vitali Klitschko said that one person has died in Solomyansk district. In Solomyan, in the south-west of the city, at least three women have been taken to hospital.

A hotel and a detached house was hit by missiles, according to deputy head of the president Volodymyr Zelensky’s office, Kyrylo Tymoshenko.

Ten explosions were reported to have been heard in the first barrage of attacks.

Klitschko added that other attacks hit the Pechersk and Holosiivsk districts, in the central and west end of the city.

Multiple areas preventively cut off power in advance of the missile strikes hitting the country, after an alert was issued at lunchtime. The strikes are partially thought to be in an attempt to affect Ukrainian morale.

Other areas targeted include the cities of Khmelnytskyi and Zaporizhzhia, and Kharkiv oblast, the Kyiv Independent reports.

“Due to the missile attack threat, [Ukraine’s state electricity grid operator] Ukrenergo is taking measures to temporarily restrict electricity supply. This is necessary to reduce the load on the power system in case our infrastructure gets hit,” Odesa oblast governor Maksym Marchenko stated.

People in Kyiv have reported hearing loud explosions after Russia launched a series of airstrikes.

A warning went out at lunchtime to people in Ukraine, putting the whole of the country under alert.

Moscow’s defence chief, who has been heavily criticised by pro-war voices in Russia for battlefield failures during the 10-month campaign, stated the situation on the frontlines remained “difficult” and lambasted Ukraine and the West for trying to contain Russia.

“We meet the New Year in a difficult military-political situation,” Shoigu continued, adding, “At a time when there are those who are trying to erase our glorious history and great achievements, demolish monuments to the victors over fascism, put war criminals on a pedestal, cancel and desecrate everything Russian.”

With bloody fighting ongoing across the 1,000-km (600-mile) frontline, and Russia not having secured any territorial gains since the first months of the war, Shoigu told Russian soldiers: “Victory, like the New Year, is inevitable.”

Russia’s leadership may be preparing a new mobilisation order and could close its border to men within a week, according to Ukraine’s defence minister.

Oleksii Reznikov addressed Russian citizens in a video message. Speaking Russian, he warned people who might qualify for mobilisation.

“I know for a fact that you have about one week left before you still have any choice,” the minister continued, adding, “In early January, the Russian authorities will close the borders to men, declare martial law, and begin another wave of mobilisation. Borders will also be closed in Belarus.”

Reznikov warned that Russians living in cities would be at particular risk.

Kryrylo Budanov, the head of Ukraine’s intelligence directorate, told the BBC on Friday that Russia’s new mobilisation order would start on 5 January.

The figures, which have not been verified by the Guardian, say nearly 106,000 Russian armed forces members have been killed since the invasion began on 26 February.

Another 16 armed personnel vehicles (APVs) were taken out, along with three tanks, six drones and six artillery systems.

There is a “realistic possibility” that Russian forces will launch long-range strikes on Ukraine in the coming days to undermine Ukrainian morale over the new year period, the UK Ministry of Defence says.

It its daily intelligence update, the ministry announced that since October, Russia had followed a general pattern of launching an intensive wave of strikes every seven to 10 days, primarily targeting Ukraine’s power distribution network. The latest was on Thursday.

It added, “Russia is almost certainly following this approach in an attempt to overwhelm Ukrainian air defences.”

“However, there is a realistic possibility that Russia will break this pattern to strike again in the coming days in an effort to undermine the morale of the Ukrainian population over the new year holiday period,” it noted.

Ukrainian President Volodymyr Zelensky said that he thinks Ukraine’s air defense can become “the most powerful in Europe” and help uphold security for his country and Europe.

“Ukrainian air defense can become the most powerful in Europe, and this will be a guarantee of security not only for our country, but also for the entire continent,” he stated

“This year, we not only maintained our air defenses, but we made them stronger than ever,” Zelensky continued, adding, “But in the new year, Ukrainian air defense will become even stronger, even more effective.”

Ukraine’s president also said he held another staff meeting on Friday, with the main point of discussion about the Donbas region in eastern Ukraine, “where the fiercest battles are going on.” He added Ukraine is holding its positions in the cities of Bakhmut, Soledar and Kreminna.

“There are also areas of the front where we are slowly advancing,” Zelensky stated, without giving further details.

Zelensky also called the electricity supply issue “one of the most important tasks for the next year.”

A US State Department spokesperson expressed concern about China’s “alignment with Russia as Moscow continues its brutal and unlawful invasion of Ukraine” after a call between Russian President Vladimir Putin and Chinese leader Xi Jinping.

“Beijing claims to be neutral, but its behavior makes clear it is still investing in close ties to Russia,” the spokesperson said in a statement to CNN.

“The United States and Europe have warned the PRC of the consequences of providing Russia military assistance for its war against Ukraine or systematic assistance with sanctions evasion,” the spokesperson continued, using the acronym for the People’s Republic of China.

“We are monitoring Beijing’s activity closely,” the spokesperson stated, adding that “those that side with Moscow in this unjust war will inevitably find themselves on the wrong side of history.”

“The world is watching to see which nations stand up for the basic principles of freedom, self-determination, and sovereignty, and which stand by or tacitly support Russia in its premeditated and unprovoked war of choice,” the spokesperson noted.

Ukraine’s presidential office says over 1,800 settlements have been taken back from Russian occupation

A total of 1,884 Ukrainian settlements have been liberated from Russian occupation since Russia launched its full-scale invasion of Ukraine on Feb. 24, according to a Ukrainian presidential official.

“Infrastructure is one of our main priorities,” Kyrylo Tymoshenko, deputy head of the Office of the President of Ukraine, said in a Telegram post on Friday, adding that “15,199 infrastructure objects have already been restored, almost as many are in the process of restoration.”

“On the northern border, we are putting up protective structures — anti-vehicle and anti-personnel barriers, mine-explosive barriers, and reinforced concrete sections,” Tymoshenko added.

Tymoshenko said there are 11,500 so-called “Invincibility Points” in Ukraine that offer emergency shelter and services for Ukrainians without power following Russian attacks.

He said that Ukraine received another batch of Starlink satellite units from Poland that will power the “Invincibility Points” as well as go toward energy and medical institutions.

“This is the third batch we have received from Poland and the first part of a large batch that will arrive by the end of January,” he added.

The backup power line at the Russian-held Zaporizhzhia nuclear plant was damaged and disconnected due to shelling, UN nuclear watchdog chief Rafael Grossi said in a statement on Friday.

“The ZNPP, whose six reactors are all in shutdown, continues to receive the off-site electricity it needs for reactor cooling and other essential nuclear safety and security functions from the plant’s only remaining operational 750 kV external power line,” it added.

The International Atomic Energy Agency (IAEA) team announced the connection to the 330 kV backup power line was lost at 9:35 p.m. local time Thursday “as a result of damage on the other side of the Dnipro River, some distance away from the plant itself.”

The IAEA statement also informed that while there has been no direct shelling of the ZNPP since November, the IAEA experts on site reported on Friday that they heard “the sound of loud explosions today that appeared to come from a distance of a few hundred meters from the facility, in the area of the water channel connecting the nearby Zaporizhzhia thermal power station with the Dnipro River.”

Ukraine informed the IAEA that the country’s three other NPPs, located in Ukrainian-controlled territory, were “in the process of restoring their electrical power production levels following a decrease in output after Thursday’s missile attacks.”

During the first week of December, Ukraine claimed some Russian troops were withdrawing from their positions in Ukraine’s southern region of Zaporizhzhia. The General Staff of the Ukrainian military said Russian units left the settlements of Mykhailivka, Polohy and Inzhenerne, all towns south of the city of Zaporizhzhia.