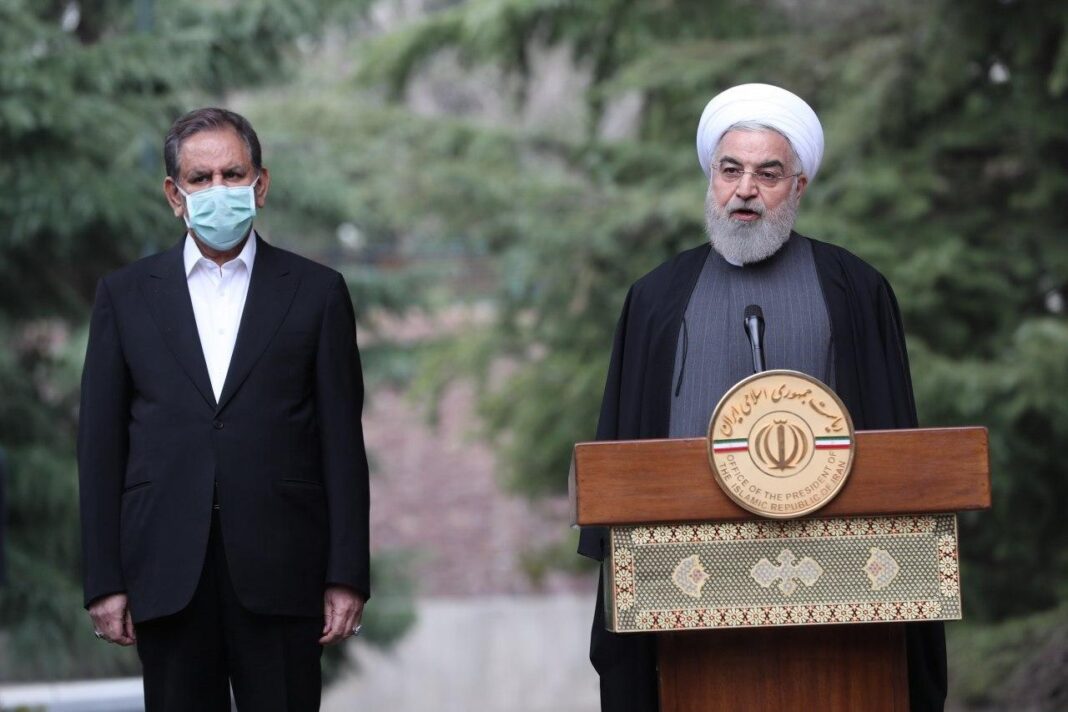 Iran's President Hassan Rouhani has defended his government’s response to the new coronavirus outbreak, dismissing as “propaganda” the claim that the outbreak in Iran was announced with delay.

Speaking after the last cabinet session of the Iranian calendar year 1398, Rouhani said his administration had “talked to the people honestly” about the virus outbreak.

He slammed what he called “lies and propaganda” spread online and said there were no “delays” by authorities in announcing infections or testing people.

“Some ask why the government isn’t intervening, but I think we have intervened significantly,” the president said on Wednesday.

“Great things have been done (including) measures no other country has taken,” he said in televised remarks after a weekly meeting of his cabinet.

“We will get past these hard days,” Rouhani added, flanked by ministers wearing face masks.

His comments came shortly after the Health Ministry confirmed 147 new deaths caused by the COVID-19 pandemic.

The latest figures released by the Health Ministry show the number of coronavirus infections has risen to 17,361, out of whom 1,135 have died and 5,710 have recovered and been discharged from hospital.

In his Wednesday remarks, Rouhani also noted that the government is doing its best to ease the enemies’ economic pressures on the people.

What follows are excerpts from his speech:

I would like to congratulate year 1399 to the great Iranian nation. It is very regrettable that we are celebrating this Nowruz without some loved ones who were either unfairly assassinated by the US, or lost in the bitter Ukrainian plane crash, or the funeral of our great commander in Kerman, or in this tough disease.

I believe that the year 1398, which we are in the last days, was the year of honour for the great Iranian nation. Our people managed to resist the enemies’ plots aimed at making their lives hard and forcing them to surrender.

In the economic field, which the enemies’ pressure was on people’s lives in year 1397 and 1398, the harshest pressures were on the Iranian nation, the economy and the oil industry.

In the year that passed, despite all pressures, our economic heroes could keep our economy in a fairly stable position. This year, our point-to-point inflation decreased to 25% from 52%, which is an honor for our great nation.

The nine-month figure tells us that in 1398, our economic growth is positive with and without oil. We hope that the fourth quarter shows the same figures, which is very important in our history.

Because of the pressures people were under, we increased the employees’ salary 20% in year 1398. The government is doing its best to ease the enemies’ economic pressures on the people.

This year, we added a support package for 60 million economically depressed people in the country, and we have paid the package since 4 months ago, and we will pay it next year, God-willing.

I would like to mention the floods that happened in the beginning of this year, which was almost unprecedented. The heavy rainfalls caused floods in 25 provinces and the estimated damages it made was 35 trillion tomans.

Houses of all people who were hit by the floods earlier this year were reconstructed or mended. We were able to reconstruct about 80,000 houses in the flooded areas this year and build about 30,000, with construction totaling about 46,000 housing units in the next couple of months.

In addition to economic issues, political and security issues happened in year 1398 as well. First, we began reducing our commitments in response to the governments that were not able to act well regarding the nuclear agreement. Today, our nuclear industry is working free of any kind of limits, and great work has been done today, which we will explain more on April 8.

In the international court, our case against the United States’ crime won and we were able to resist America’s other plots strongly.

The Americans assassinated our great commander and we have not left –and will not leave- his assassination unanswered, because our armed forces gave a strong response to them and showered their major base in the region with missiles, which I believe the Americans will not forget it ever, because it was the first time in this region that they received a decisive and quick response for their savage, cruel act.

Most important than that was people’s response in Iran, Iraq and other countries. They thought that they could break our people because they had assassinated the commander of resistance, but it turned out to be the other way round and our resistance became stronger against the US’ aggression.

I cannot recall any strong response to the United States’ aggression with their drones. We downed their drone, which had breached our territory, with our own air defence system.

God-willing, we will continue the Bavar-373 project next year and make it stronger and more complete. I feel obliged to appreciate all military forces in the country for decisive resistance against the United States.

Although the Ukrainian plane crash was very regrettable and unbelievable, two things happened in response to it; first, it was people’s sympathy. All people and the authorities, from the Supreme Leader of the Revolution to all people, respected their bloods and called them martyrs. The other thing that happened was that the armed forces came and told the truth in the shortest time possible and apologised for it bravely.

In year 1397 and 1398, we unveiled the greatest projects. In the field of utilities, dams and refineries, in the second half of the year, 227 major projects were opened with 33 trillion tomans.

This year, in addition to wheat, our rice production was also unprecedented and took us near self-sufficiency. God-willing we will open very important projects in the fields of water and canals.

From the end of this year, the country’s gas production is 1,000 million cubic meters per day, which is happening for the first time in the history of Iran.

When the 11th government took office, 10 phase of South Pars had been inaugurated, and we opened 17 other phases. This means we have finished 27 phases, except for Phase 11 which is yet to open.

Another important thing was the discovery of the greatest oil reserves in the history of Iran. We discovered 53 billion barrels of oil in southwestern Iran, which was named Namavaran.

This is the case in all areas, including in the field of railways. You see, in the last few months, we have launched three major projects around Tehran. The important North Freeway that connects Tehran to the North, which reduced 90 kilometers to 32 kilometers, is one of the great masterpieces of building our country in terms of bridges and tunnels.

The same road we opened yesterday connects Shahid Hemmat Motorway to Karaj. When this government took office, only 3 per cent of this road was completed and this government completed the remaining 97% in 6 years.

Unveiling major projects in the hardest times of sanctions was a stinging slap on the aggressive superpower.

Coronavirus is not specific to our country. Right now, 170 countries around the world are grappling with this virus. We managed coronavirus well, which is very honourable.

Compare Tehran with London, Berlin and Paris. It is a simple math. Their shelves are free and they are fighting over a tissue and people are very worried about foodstuff and their hospitals are announcing that they do not have any room left.

Here, I would like to emphasise to the people that the government has done everything it can; for sanitary and medical equipment to equipping hospitals, the facilities needed for dear nurses and doctors. We have increased whatever is produced domestically and we will import whatever we needed from overseas.

I would like to thank the Supreme Leader for endorsing the Supreme National Security Council resolution on coronavirus and the National Task Force for Fighting Coronavirus.

In the field of congregations, a great deal has been done in the country and I want to thank the great maraji, clerics and Friday prayer imams. They broke ossification. Great work has been done; it is not easy to stop Friday prayers.

God willing, in 1399, may God send His blessings and healing on the sick and all those who are hospitalised, and may He help us through these difficult days.

The government is ready to serve people next year. From the first office day in the new year, we have plans. Our first official working day is Saturday, which will begin with the session of National Task Force for Fighting Coronavirus.

I thank the newspapers, the media and cyberspace and all those who serve, and I wish them a very good year, and may God bless us all next year.