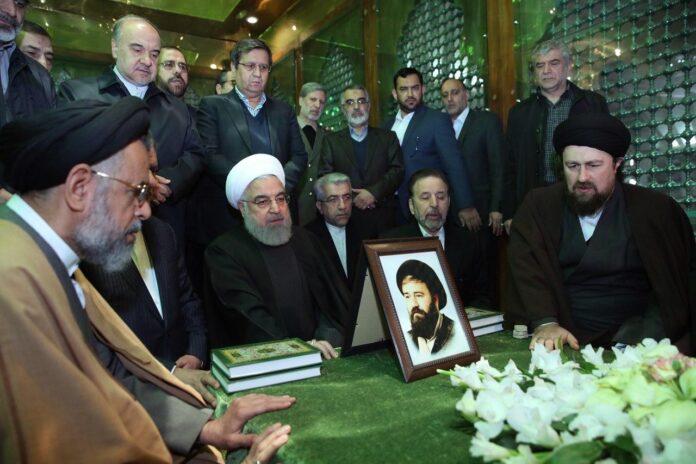 Iranian President Hassan Rouhani and members of his cabinet paid a visit to Imam Khomeini’s mausoleum on Sunday, and renewed allegiance with the late founder of the Islamic Republic and the martyrs’ ideals.

Rouhani and his cabinet commemorated the great founder of the revolution, and the late Chairman of the country’s Expediency Discernment Council Ayatollah Hashemi Rafsanjani, reciting fatiha and laying a wreath on their tombs.

In his speech after the ceremony Rouhani said “Imam’s goal was that governance, within the framework of Islam, should be in the hands of people, and he was aware that justice and reform in the society, and growth and development are impossible without the presence of people.”

Referring to US President’s peace plan he said “although we do not approve the policy of tension and opposition, our people know that today there is no way but resistance to the aggressors, aggressors who wrong not only our nations but also all the Muslims in the world, especially the Palestinian nation. These days we see how shameful and abhorrent to all the Muslims and to Freedom-lovers in the world is the great shame they have registered as “deal of the century.”