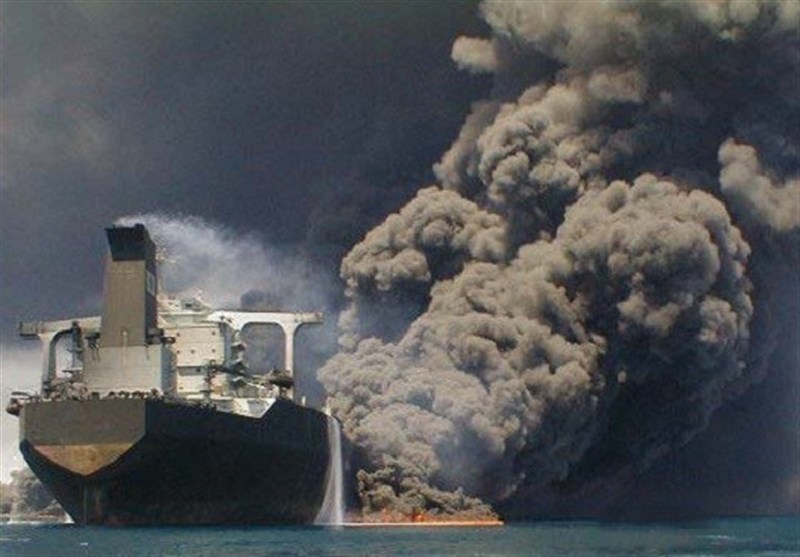 An Iranian oil tanker, which caught fire after colliding with a bulk freighter off China's east coast, is giving off poisonous gases, hindering rescue work there, the managing director of the National Iranian Tanker Company (NITC) said.

Leakage of the poisonous gases have hindered rescue work and cleanup efforts around the oil tanker Sanchi, which is in danger of exploding after the collision, Sirous Kian-Ersi said on Monday.

Three Chinese fireboats are busy pumping water to contain the fire but have failed to do so due to the raging blaze, he added.

Authorities have set up a 10-nautical-mile cordon around Sanchi.

China, South Korea, Iran and the US have sent ships and planes to search for Sanchi’s 32-crew members. None of the missing crew has been found except for one.

Searchers have found the body of one of the missing sailors in the East China Sea, CEO of Ports and Maritime Organization of Iran Mohammad Rastad said on Monday.

A post-mortem will be conducted in Shanghai to determine the identity of the deceased individual, he added.

Sanchi spewed its £44million cargo into the East China Sea after it collided with the CF Crystal about 160 nautical miles off the coast of Shanghai on Saturday.

Thick plumes of thick dark smoke could still be seen billowing into the sky above the towering inferno.

The tanker was sailing from Iran to South Korea, carrying 136,000 tons of condensate, an ultra-light crude oil, which is the equivalent to just fewer than one million barrels.

The CF Crystal had been damaged but “without jeopardizing the safety of the ship” and all of its 21 Chinese crew had been rescued, according to China’s transport ministry.

The freighter was carrying 64,000 tons of grain from the United States to China’s southern province of Guangdong when it crashed, the ministry said.