Report: US seeks to get navy involved in Afghanistan strikes 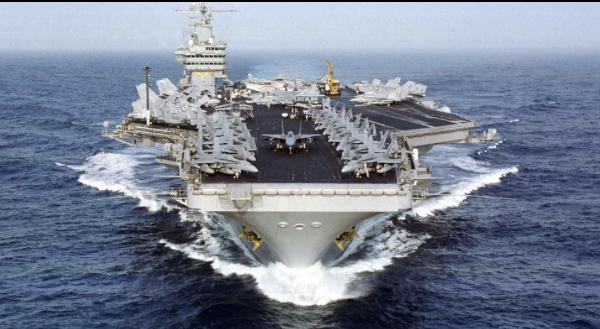 The Pentagon is drawing up plans to shift the military involvement in Afghanistan onto the US Navy, which will likely be called on to deploy more aircraft carriers to the Middle East to provide launching ground for “over the horizon” airstrikes, according to a report.

The withdrawal of American army troops from Afghanistan, which was completed in a chaotic fashion a day before the August 31 deadline, means the United States now has limited options to launch airstrikes on Afghan soil.

The lack of US-controlled airfields near Afghanistan has prompted military planners at the Pentagon to look at the US Navy as a potential alternative to the army, POLITICO reported, citing informed military sources.

If the plan is finalized, more drones and manned aircraft will be taking off from decks at sea to conduct airstrikes in Afghanistan.

“I think a lot of that mission is going to fall on the Navy,” a Navy official told POLITICO on condition of anonymity as the Pentagon’s plans have yet to be finalized.

The official added that “this is a great example of why we need more money to operate forward — things like this are what we’re built to do, but we need the funding and support to keep doing it, and that hasn’t always been there”.

A fresh round of requests from the US Air Force and Navy to Congress to approve more funding for the plan could meet with opposition from lawmakers who had hoped the end of America’s longest war would finally see the US military focus more aggressively on China.

Defending his decision to hastily press ahead with his ill-planned withdrawal from Afghanistan, President Joe Biden pledged last week that airstrikes will continue in the country, but without American troops on the ground to back them up.

“We will maintain the fight against terrorism in Afghanistan and other countries. We just don’t need to fight a ground war to do it,” Biden said on Tuesday, adding, “We have what’s called over-the-horizon capabilities, which means we can strike terrorists and targets without American boots on the ground, very few, if needed.”

But the Biden administration has yet to detail a plan for how aircraft will collect intelligence on potential targets, or conduct sustained missions from such great distances.

Air Force pilots flying from US bases in Qatar or the United Arab Emirates have for years conducted airstrikes in Afghanistan. But those missions are increasingly cumbersome as the American pilots first have to wind their way through the Persian Gulf around Iran, and back up through Pakistan. That means aircraft spend hours in the air and need refueling at least once before hovering over their intended targets in Afghanistan.

“Land-based fighters in Qatar or Kuwait may not have the time on station to do close-air support missions for special operations forces,” Bryan Clark, a former Navy officer now at the Hudson Institute, told POLITICO.

He stated that could lead to the use of more long-loitering drones, and Navy aircraft flown from decks at sea.

Flying drones and manned aircraft from a carrier in the North Arabian Sea would decrease some of that flight time, allowing pilots to fly over Pakistan before directly entering Afghanistan’s air space. But those deployments will put extra strain on crews and ships, and also require pulling assets from the Pacific, where the Biden administration needs them to counter the influence of China.

The Japan-based aircraft carrier USS Ronald Reagan, which flew F/A-18 Hornets over Kabul during the evacuation operation last month, still remains in the North Arabian Sea alongside the USS Iwo Jima, which launched the 24th Marine Expeditionary Unit into Kabul at the same time.

For decades, the United States has sought to project military power in the Pacific via its aircraft carriers based in Japan. The call to dispatch Reagan to the Middle East this spring worried China hawks in Washington, who bristled at the idea of leaving the entire Pacific region without a fully operational aircraft carrier for months on end.