Reopening of the British embassy; two views, for and against 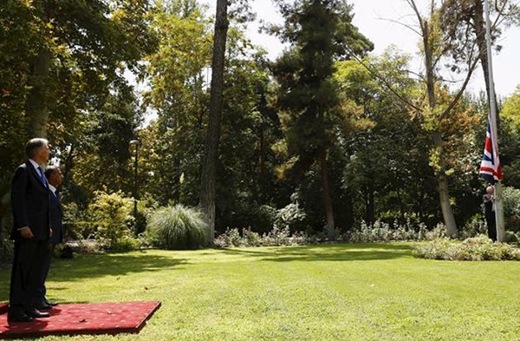 An Iranian MP has said that Iran should not limit itself; rather it is expected to seize the existing opportunities and upgrade ties with other nations.

Two Iranian MPs have spoken for and against the British embassy reopening in Tehran on August 23 which came after four years of strained ties between the two countries.

Embassy reopens with no consular services

Mansour Haghighatpour said that the embassy reopening would be a good development if the British government vows not to meddle in Iran’s internal affairs.

The Brits should make up for their past mistakes and Iran’s oversight bodies should act cautiously and not allow any interference in the country’s affairs, he said, adding that media and people from different walks of life should remain sensitive about this issue so that we see no repeat of past events.

The MP further said the British embassy has reopened without offering consular services and this is one downside of it, adding they are only after political practices and we are opposed to that.

About 400,000 Iranians, willingly or unwillingly, are living in Britain with their families seeking to travel there, Haghighatpour said, adding that it is not appropriate for them to travel to Dubai and Turkey to get visas.

He then took a jab at reopening of the embassy which remained unannounced until too late in the game, saying that the Foreign Ministry was expected to act more properly on this.

“Iran seemed to have acted hastily in this regard. We have not forgotten [British Prime Minister] David Cameron’s speech against Iran at the UN General Assembly. […] We should have waited until JCPOA produced a result so that we could see their reactions to Iran’s nuclear program before taking appropriate measures for the embassy reopening”.

Britain should make up for the past

Nozar Shafiee said that Tehran should upgrade its ties with Britain cautiously thanks to this country’s poor record in Iran.

He further said that the British embassy reopening has been affected by the Joint Comprehensive Plan of Action (JCPOA), adding the international impacts of the Iran nuclear deal paved the way for different countries, including Britain, to improve their ties with Iran. But, we have concerns from the past, he added.

The MP also said that Britain should try to polish its image in Iran, adding the Brits should show good intentions and change the bitter memories the Iranians have of British interference in Iran’s internal affairs. Iran’s ties with Britain are more sensitive than other European countries, he stressed.

Shafiee then said the reopening of the British embassy at this level [without consular services] is part of the executive stage, adding this is the starting point and ties will be developed in the future.

“Despite all concerns and critical views, we are not expected to move toward self-imposed sanctions when a country welcomes the reopening of its embassy in Iran. To limit ourselves amounts to missing out on opportunities. It surely comes with a price. We need to seize the opportunities”.