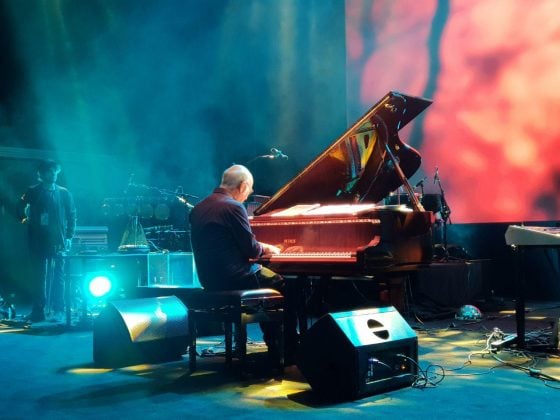 Einaudi performed three shows at the Grand Hall of the Interior Ministry in Tehran from Tuesday to Thursday.

He was accompanied by a five-man orchestra, as well as a sound, light and back-liner technician.

“Elements”, “Experience”, “Night” and “Fly” were some of the compositions performed during the concerts.

Speaking in a press conference on the eve of his concerts in Tehran on Tuesday, Einaudi had noted that he is happy to have a chance to perform in Iran and see his rather large fan base in the country.

“Music is a language that sees no boundaries,” he said.

The Bafta-nominated Italian pianist said he has researched a lot about his Iranian fans’ taste in music, vowing to perform “surprising” and “memorable” tracks for the Iranian audience during his shows.

The composer said the trip is a special opportunity to get a closer understanding of the lifestyle and culture of the Iranian people.

Born in 1955, the renowned pianist began his career performing classical music in the 1980s.

He is known for his film scores for “This is England”, “I’m Still Here”, and “‘Doctor Zhivago”.

But many know him by his “Elegy for the Arctic,” a 2016 concert on polar ice caps to protest the melting of glaciers in the Arctic.

What follows are Honar Online’s photos of his performances in Tehran: