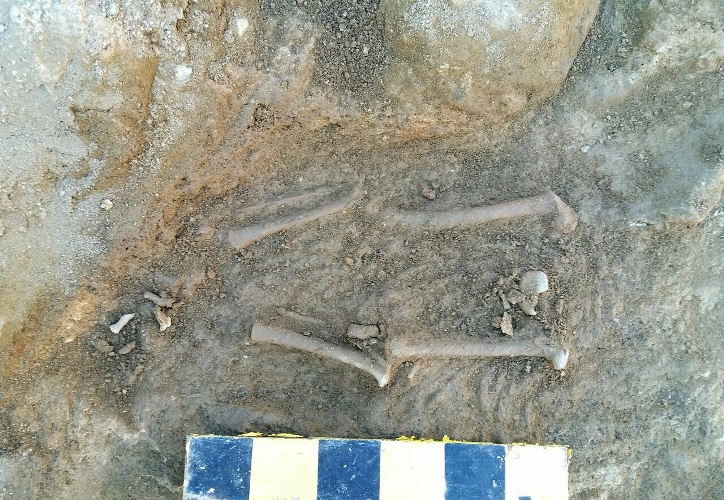 Iranian archaeologists have discovered the remnants of the body of a 10-year-old child dating back to 2,800 years ago in the central province of Hamadan.

Head of the Archaeological Excavation Department of Hamadan Province Mohammad Sha’bani said this is the oldest body unearthed in the province.

“The body belongs to a 10-year-old child,” he was quoted as saying in a Farsi report by IRNA.

According to Sha’bani, archaeologists have also unearthed another corpse, and will continue investigating into the new discovery.

“The newly discovered bodies lack any historical belongings,” Sha’bani said, adding during their search operations, the archaeologists have uncovered a column base dating back to an ancient age – possibly Seleucid era – and an oil crack.

Hamadan has been home to one of the oldest civilisations in the world. The remains of an ancient city were unearthed by archaeologists in Hamadan province about five months ago. The series of underground subterranean tunnels dating back more than 2,000 years were discovered near Samen. The tunnels connect 25 rooms that served as houses around the time Jesus Christ would have lived.

Back in October, Iranian archaeologists started investigating two ancient skeletons of a man and a woman discovered in Hamadan. The skeletons were discovered while municipality workers were working on a project to renew water networks. During the digging process, they found two stone boxes similar to coffins.

The historical pieces grabbed the headlines as the most significant signs of Iran’s long history and civilisation. The archaeologists are proceeding with their excavation operations in the region.

Officials are working on a plan to establish a website showcasing the unearthed historic pieces from the region.

Studies on the skeletons had revealed that they belong to the Parthian era, over 2000 years ago.