Rafsanjani: US should compensate past mistakes prior to thaw in ties 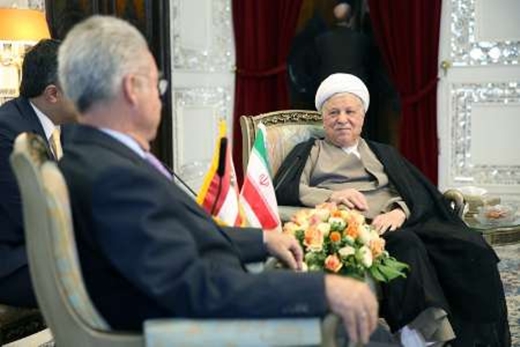 Rafsanjani told the Austrian president that Iran and P5+1 should prevent domestic and foreign hardliners from meddling in the deal and should remain committed to their pledges.

Chairman of the Expediency Council Ayatollah Akbar Hashemi Rafsanjani said on Wednesday that the US pursued hostility toward Iran and should compensate for its past prior to a thaw in ties.

Rafsanjani made the remarks in a meeting with visiting Austrian President Heinz Fischer and accompanying delegation.

Rafsanjani said that Austria is moderate and independent European government in terms of politics and economy.

Referring to Iran’s peaceful and principled policy at different historical junctures mainly after the Iraqi-imposed war (1980-1988), the top councilor said that during the critical period the world governments changed their policy and sided towards Iran and left Iraq alone and the then United Nations secretary-general identified the Iraqi dictator Saddam Hussein as aggressor.

Iraq attacked Kuwaiti to plunder Kuwaiti oil wealth and again repeated its mistakes which led to Saddam’s ouster, he said.

World public opinion indicates they are happy with the nuclear deal between Iran and G5+1 and called both sides to remain committed to implementing the text of the deal, Rafsanjani said.

Both sides should prevent domestic and foreign hardliners from meddling in the deal and should remain committed to their pledges, Rafsanjani said.

On the future of relations between Iran and the US, Rafsanjani said the US administration should adopt a fair policy based on mutual respect and admit to its mistakes in the past and compensate for them.

The Islamic Republic of Iran is ready to broaden cooperation and relations with all the countries mainly with Europe, he said.

Given the deplorable conditions of people in Syria, Libya, Palestine, Yemen, Iraq and other countries involved in the campaign against terrorism, he said stopping the deterioration of the humanitarian crisis requires collective cooperation of all countries away from regional prejudice, Rafsanjani said.

The root cause of all insecurities and terrors in the world is despotism and colonialism, he said.
Expressing regret over the support lent by some countries to terrorists, he said they should not assume that through backing terrorists they can attain their goals, these countries only make a big hurdle for the region and they should be assured that they will pay for their measures because terrorists recruit from among angry and disgruntled youth around the world.

Referring to the failed experience of occupation of Afghanistan by NATO under the pretext to the fight against terrorism and eradication of drug narcotics, Rafsanjani said they failed to attain their goals, but the volume of drug narcotics increased ten-fold and the Taliban gained more power.

Europe for many years made use of cheap human resources and their huge natural resources of under-developed countries and now it is their turn to compensate, he said.

The Austrian president, for his part, expressed pleasure with nuclear deal struck in Vienna on July 14 and said the Austrian government attaches importance to such deal and believes that the deal prepared the ground for expansion of all-out cooperation on various fields as well as fight against international terrorism.

Austria gives priority to expansion of cooperation based on mutual respect with others such as the Islamic Republic of Iran, the Austrian president said.

European countries have reached the conclusion that world’s problems should be resolved through dialogue and there is no room for military action, he said.

Expressing satisfaction over his visit to Iran and meeting with the chairman of the Expediency Council, the Austrian president described negotiations with Iranian officials as fruitful.