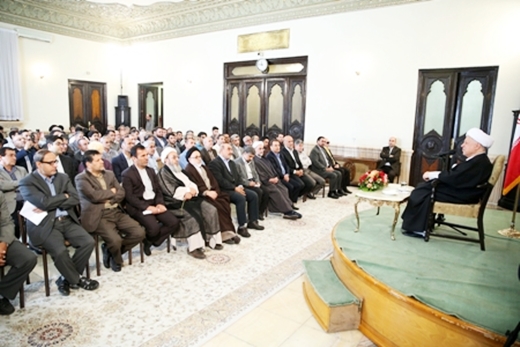 War veterans have every right to opine about the country’s major developments and should not be disheartened by the hue and cry of a loud minority, said Ayatollah Rafsanjani.

The chairman of the Expediency Council said on Tuesday that the Joint Comprehensive Plan of Action is a manifestation of the victory of the Islamic Revolution and the Iranian nation.

“Comments made by the opponents and the supporters of the JCPOA in the United States reveal that the Iranian nation has achieved a victory in line with the objectives of the Islamic Revolution,” Ayatollah Akbar Hashemi-Rafsanjani said in a meeting with the commanders of the Sacred Defense (the 1980-1988 war Saddam’s Iraq imposed on Iran).


“You veteran combatants have every right to opine about the country’s major developments and should not be disheartened by the hue and cry of a minority that has a loud voice,” said the ayatollah.


“The comments made by the supporters and the opponents of the nuclear agreement in the US administration and Congress are worth contemplation and they reveal the political victory of the Iranian nation in line with the objectives of their revolution,” he said.


“Iran is now a member of the international nuclear club and its entire nuclear activities are recognized as legal in accordance with the rules and regulations of the International Atomic Energy Agency (IAEA),” he said.


Ayatollah Rafsanjani further said that the international community has made sure that Iran has never been after manufacturing atomic bombs. It is not a small achievement.