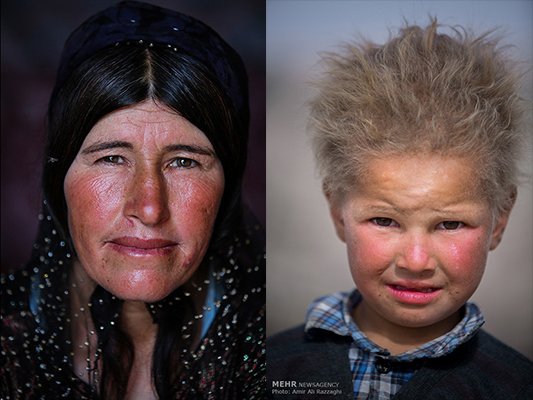 Qashqai people live in Southern Iran. While most of these nomadic pastoralists are of Turkic origins, Lurs, Kurds and Arabs are also found between them.

The unique faces of tribal women, men and children, who always pass through the mountains and plains, have different expressions. From the small lines on a woman’s face to the bristling of her hair, each characteristic narrates the story of the days of nomadic life.

More than ten families of Qashqai tribes pass through rough roads to erect their tents around the mountains of the region and near the plains of Azhdar Khowsh area.

The traditional nomadic Qashqai people travel with their flocks twice a year. They travel roughly 480 km to the summer highland pastures in north of Shiraz; and 300 miles south to the winter pastures on lower, warmer lands near the Persian Gulf.

They live in black tents that are made of goat wool. Nomadic women are responsible for taking care of children and preparing family meals along with milking of goats and carpet and Kilim weaving. These women wear traditional clothes and their only make-up is Kohl which is an ancient eye cosmetic. The tribal men are shepherds and devote much of the day to breeding and grazing animals.