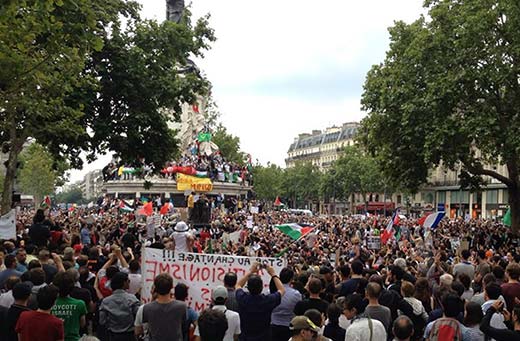 Pro-Palestinian protesters clashed with police in central Paris when thousands of marchers defied a ban by French authorities to rally against the occupying regime of Israel's offensive in the Gaza Strip.

French interior minister Bernard Cazeneuve warned organizers in a television address that they would be held responsible for any clashes and could be prosecuted for ignoring a ban that was confirmed by the country’s top administrative court.TV footage showed demonstrators wearing balaclavas and traditional Arab keffiyeh headdresses throwing projectiles at riot officers after two hours of peaceful protest.By 1700 GMT (13:00 EST), most demonstrators had been evacuated from the square and order restored. Paris police said they had made about 50 arrests.French authorities have refused to permit several pro-Palestinian protests because they feared violence. Marchers clashed with riot police in and around Paris in recent weeks, with some targeting synagogues and Jewish shops.“Anti-Semitic violence exists: we must face it head on,” Cazeneuve said.Some protesters, NGOs and even ruling Socialist politicians have criticized the bans on the rallies as counter-productive.Cazeneuve noted that over the last two weeks, five marches had been banned, out of about 300 such protests across the country.“Freedom of protest was thus the rule, and bans the exception,” he said.According to the interior ministry, some 2,000 police were sent to the Place de la Republique to surround the demonstrators, which numbered about 5,000.Reuters photographers saw one police officer slightly injured, the front windows of the Crowne Plaza hotel smashed and a bus shelter wrecked.Organizers denied accusations of anti-Semitism.“Our goal is not to attack the Jews, it is to condemn the policies of a government,” Tarek Ben Hiba, a local politician and head of one of the 20 associations organizing the protest told Reuters.Protesters were seen waiving Palestinian flags, chanting “We are all Palestinians” and carrying placards reading: “Zionists, terrorists”. At least one Zionist flag was burned, a Reuters photographer said.“It’s a scandal that they’re banning protests. It’s our right. We were attacked with tear gas even though we didn’t do anything,” said 24-year old temp worker Sabrina, who declined to give her full name.In the Mediterranean port city of Marseilles, some 2,000 people marched peacefully on Saturday in an authorized demonstration.France has both the largest Jewish and Muslim populations in Europe and flare-ups in the Middle East have often in the past added to tensions between the two communities.