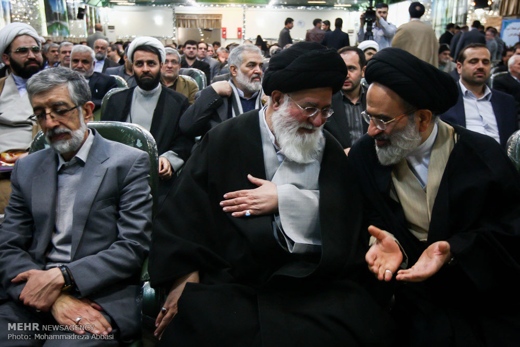 Principlists get together to examine ways of securing much-needed unity for parliamentary elections expected to be held in early 2016.

Principlist heavyweights attended the gathering which came as the conservative camp prepares for a strong showing in parliamentary elections in early 2016.

The gathering drew principlist and reformist reaction. The following is the translation of a report Javan, a principlist daily, filed on the gathering:

Speaking at the gathering Ayatollah Ahmad Alam al-Hoda, a member of the Assembly of Experts [who is widely known for his tough stance against reformism and reformist figures] said, “We are united because in words and deeds we don’t act in a partisan way. It is the love of the Prophet’s household and the leader that brings us together.”

He went on to say, “From the past to the present, clergymen from the Combatant Clergy Association and the Society of Seminary Teachers have led the principlists. Veterans have always made the decisions and younger figures have appeared on the political stage.”

On the sidelines of the gathering, Ayatollah Alam al-Hoda said that classifying principlists as moderate and otherwise is a ploy designed to drive a wedge among them.

He went on to say that Ahmadinejad is history. He never was any more than he was: a figure. He defied the Supreme Leader and collapsed. […]

Another speaker at the gathering was Seyyed Reza Taghavi who said the price individuals pay for tolerance and accommodation is less than the price they pay for dispute.

He added, “Politics is the art of dealing with those who oppose you. Those who do not have the ability to accommodate those who hold opposing views should stand down.” […]

And the third speaker was Gholamali Haddad Adel who said, “We are here to stand up for the inalienable rights of the Iranian people. Today our focus is on the right to peaceful nuclear technology and to keeping the centrifuges spinning.

“The Supreme Leader of the Islamic Revolution has underlined that right. If the enemies sense that there are individuals among us who might budge in the face of their bullying tactics, they will crank up the pressure as we step back. And that is in contrast with our motto of independence. Besides, their bullying will be unstoppable.

“The Supreme Leader believes that our budging on one front won’t be the end of the story. They would expect us to step back further and further until their satisfaction is guaranteed.

“If we fail to resist their threats today, tomorrow they may threaten us to drop the term Islamic from the official title of the country, or they will refer the case to the Security Council. If we want to stand up to them, we’d better do that today to prevent things from getting more complicated.

“The Supreme Leader singled out nine criteria for principlism a few years ago. We need to take account of those principles all the time. Of course, depending on the conditions the country is in, more principles might be added to the list.  For instance, commitment to resistance-based economy is one such principle.

“As principlists we need to develop in-depth insight into the conditions in order to secure unity. Today, the conditions we are in are not the same as the past. Our decisions today should be in line with our conditions today. A principlist victory should be the basis of our efforts in the upcoming parliamentary elections.”

On the sidelines of the gathering, Mohammad Reza Bahonar told reporters, “Sometimes questions are raised that spark controversy and might drive us away from our principles and play into the hands of those who seek to divide us. We need to make sure we do not publicize such questions.”

In conclusion, the daily said it wouldn’t be surprising to see the reformist camp scramble to target principlists and their unity in the days and weeks to come.