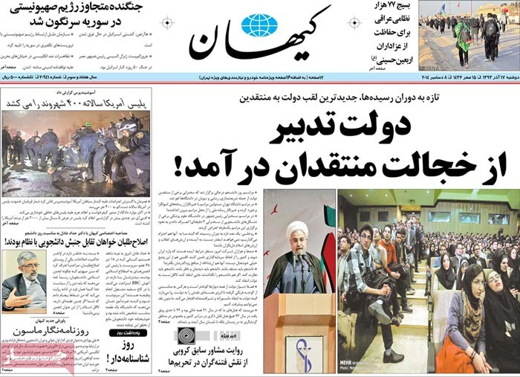 Kayhan criticizes the president for his failure to denounce the US in his Student Day speech.

The speech President Rouhani made at Iran University of Medical Sciences on Sunday to mark University Student Day drew a strong reaction from Kayhan whose managing editor Hossein Shariatmadari had the following to say in the editorial of the principlist daily on Monday December 8:

There have been two glorious peaks in the history of the student movement in Iran. Thanks to the crucial nature of each of these two events, they have turned into  momentous days [in Iranian history]. December 7 and November 4. On both occasions Iranians stood up to the United States and condemned the criminal acts of this hegemonic power.

December 7 has been registered as University Student Day in the calendar of the Islamic Revolution. November 4 is known as the Anti-Hegemony Day. Special ceremonies are held [each year] on these two days to commemorate epic-making moments in Iranian history.

Down with America is an integral part of the identity of these two occasions which are meant to challenge the US administration, as the late Imam Khomeini said not the American people, for the crimes, plundering and killings it commits.

Obviously, if speeches made on ceremonies to mark these two occasions fail to encourage the public to take on the murderous United States and if they do not identify the Great Satan as the main enemy of the nation, Islam and revolution, they have in fact distorted the true nature of these two epic occasions.

Such failure would amount to disregard for the blood of those who were martyred on December 7, 1953 and disrespect for the glorious takeover of the Den of Espionage in favor of the enemy. It is just like failure, in ceremonies to mourn the martyrdom of Imam Hussein, to mention the crimes Yazid, Shemr, Amr ibn Sa’ad and Ibn Ziyad committed.

One should not forget the fact that mourning ceremonies are designed to keep the memory of the grandson of Prophet Muhammad alive and remind the faithful of the crimes Yazid and his followers committed back then, crimes which are being repeated by some in this day and age.

On Sunday, Dr. Rouhani, the esteemed President of the Islamic Republic, who was at Iran University of Medical Sciences for a speech to mark University Student Day talked about anything but the primary theme of the event: the necessity of countering the US and the crimes this renegade power commits.

There are a few points about the esteemed president’s comments before the carefully chosen audience on Sunday. The present article does not seek to go into detail; it simply reminds the readers of a few points.

Despite expectations, in a speech to honor the memory of those who fell martyr on December 7, 1953, the president made no mention of the US role in the murder of three Iranian students and other heinous crimes the US has since committed.

Instead, the president used the occasion to praise the foreign policy of his own government by saying: Today everyone knows that the government of the Islamic Republic of Iran is against violence and extremism, otherwise the Iranian-proposed World against Violence and Extremism initiative put forth at the UN General Assembly wouldn’t have been voted for almost unanimously with the exception of two or three countries, including the US and Israel.

The president’s comments were meant to praise his government, not recall the crimes committed by the United States. Didn’t the General Assembly unanimously – the US and Israel included – vote for the Dialogue among Civilizations initiative of Mr. Khatami? Why was it that President George W. Bush later called Iran part of an Axis of Evil? Mr. President, why have you pinned so much hope on the vote for your anti-violence initiative?