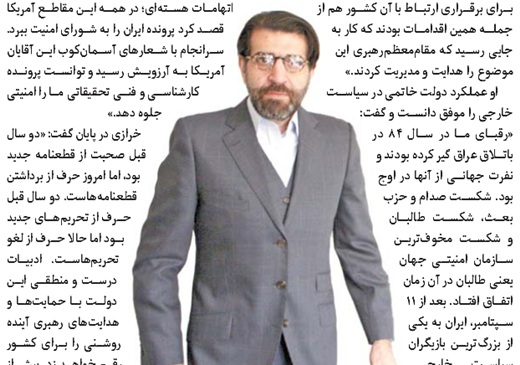 The glaring miscalculations of the Ahmadinejad government led to a decline in Iranian authority, says Sadegh Kharrazi, a former Iranian diplomat.

The Law School of the Islamic Azad University in Mashhad hosted a Q and A on Iran’s foreign policy under the 10th government [Mahmoud Ahmadinejad’s] and 11th government [led by Hassan Rouhani] featuring Sadegh Kharrazi, a former Iranian ambassador to France. The following is the translation of a report Sharq daily published on February 1 on some of the comments he made:

Kharrazi said, “The glaring miscalculations of the ninth and tenth governments [both led by Mahmoud Ahmadinejad] led to a decline in Iranian authority. The six resolutions adopted during his presidency put Iran in the crosshairs of foreign threats. The wartime government and the one that followed it to lead the country’s reconstruction drive were a source of authority, but the ninth and tenth governments failed to maintain the country’s powers.

“Instead of building on the legacy it inherited from previous governments, the Ahmadinejad administration opted for adventurism for which the Iranian people paid a price. For instance, the capture of British sailors and the subsequent release of them were merely designed to showcase the authority of the president and brought about nothing of significance for Iran.

“Initial declarations that Israel should be wiped off the map and subsequent expression of readiness to establish relations with that country were other measures which prompted the Supreme Leader to intervene and manage things.”

Kharrazi hailed the Khatami administration’s performance on the foreign policy front as successful and said, “Our rivals were bogged down in the Iraqi quagmire in 2005 and global resentment at them was at their peak. The downfall of Saddam and the Ba’ath Party, the collapse of the Taliban, which is the most dreadful security organization in the world, all came during that period.

“After 9/11 Iran turned into one of the biggest foreign policy players in the world. We were the first country to react to the terror strikes. On November 22 and December 13 two more incidents helped Iran go into the lead as far as peaceful diplomacy was concerned. That was the legacy the reformist government left behind for Ahmadinejad.”

He went on to say, “Iran floated the idea of dialogue among civilizations; Iran had something to share with the rest of the world. If that idea which took aim at the clashes among civilizations had been taken seriously and complied with, so many innocent lives would have been spared.

“As of 2005, not a single resolution had been adopted in Europe or the United Nations against the [Palestinian] resistance or Hezbollah. Thanks to the ninth and tenth governments, Hezbollah was labeled a terrorist entity. For some 30 years, the US dreamed of taking Iran’s case to the Security Council [once following the embassy takeover, once when UN Security Council Resolution 598 was adopted, and once in 2003 because of nuclear allegations]. On all three occasions the US sought to haul Iran before the UN Security Council.

“Eventually because of the hearty noise these individuals made, the US dream was fulfilled and Washington was able to depict Iran’s technical activity as a security case.”

“The logical tone of the new government, supported and guided by the Supreme Leader, indicates a bright future lies ahead for the country. The ninth and tenth governments received the largest number of warnings, but these things aren’t supposed to be talked about.”