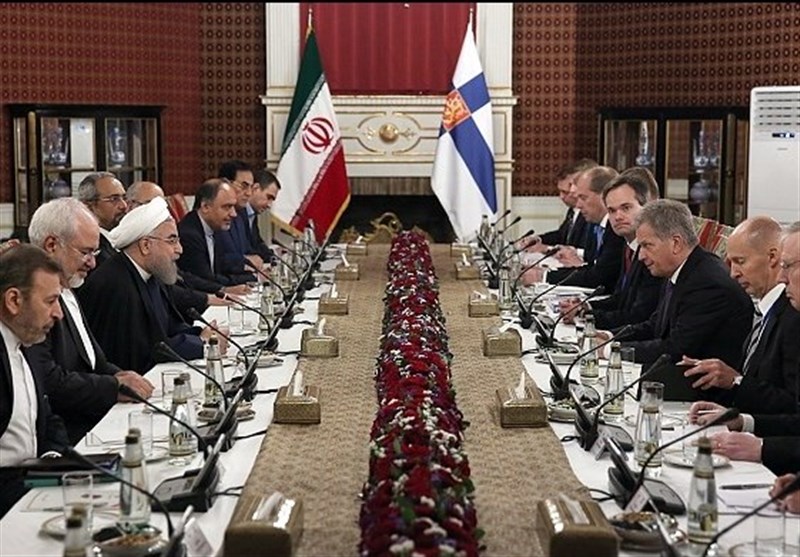 Presidents of Iran and Finland at a meeting in Tehran weighed plans for connecting the two countries via railroad.

Speaking at a meeting of high-ranking officials from Iran and Finland, held in Tehran on Wednesday, Iranian President Hassan Rouhani said Iran can help Finland have access to the Persian Gulf by rail.

“Today, Iran’s railroad is connected to Russia via Turkmenistan and Kazakhstan, and we are trying to complete a connection through Baku as well,” the Iranian president said, adding, “We welcome the connection of that railroad to Helsinki, so that Finland would be also linked to the Persian Gulf, the Sea of Oman and the Indian Ocean.” He further enumerated opportunities for mutual cooperation between Iran and Finland.

President Rouhani also highlighted the “big strides” Iran has taken to support displaced people in the region, saying Tehran is ready to share its experiences with Europe in this regard.

For his part, Finnish President Sauli Vainamo Niinisto urged cooperation to expand Tehran-Moscow railroad and link it to Helsinki, calling also for the operation of direct flights between Iran and Finland.

Voicing Europe’s deep concern about displacement of people in war-hit countries, like Syria and Yemen, he expressed willingness to tap into Iran’s experience of hosting 3 million Afghan refugees over the past years. Following the meeting of the high-ranking officials, the two countries signed four memorandums of understanding (MoUs) for cooperation in the energy industry, technology and communication, management of forest resources, and investment.

Heading a political and business delegation, the Finnish president arrived in Tehran on Tuesday.