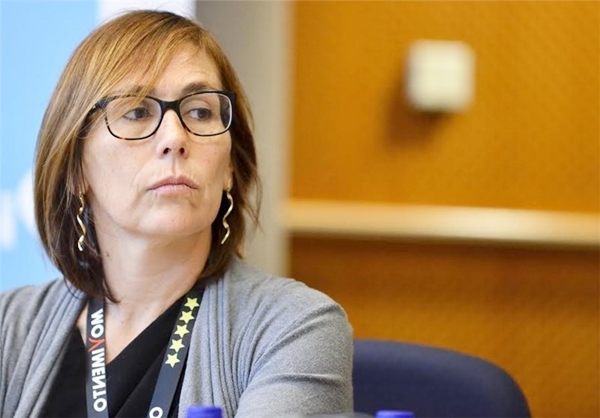 An Italian member of the European Parliament said Iranian President Hassan Rouhani’s visits to Italy and two other European destinations are aimed at normalizing relations between Iran and the West.

Following is the full text of the interview.

Q: Iranian President Hassan Rouhani on Monday departed for Rome on the first leg of his trip to three European destinations. A large delegation of political and economic leaders, including the ministers of oil, transport, industry and health are accompanying the president. What is your take on his first visit to Italy?

A: I see this first visit of President Rouhani to my country in the broader context of the normalization of Iran’s relation with the West. This normalization was much sought as it was needed and President Rouhani’s visit has a deep geopolitical and economical meaning. It is my understanding that the president will be accompanied by Iranian officials charged to sign agreements in many different fields to incentivize economic cooperation between our countries. Indeed the trip to Italy will be the first stop of his broader visit to Europe and he will meet leading Italian industrialists and investors. This visit means Iran is back to the international political scene and I hope this would translate into better living conditions for the Iranians and more peace to the region, even if the recent harshening of relations between the Saudis and the Iranians is definitely worrying.

Q: Do you believe that Iran can be a lucrative market for Italian companies following the removal of anti-Tehran sanctions?

A: Definitely so. The sanctions limited Iran’s ability to be an effective player in the international field. Probably the recent harshening of relations with the Saudi is a first sign of how this country sees Iran as a competitor in the region now that the sanctions have been lifted.

Q: What will the future hold in terms of economic opportunities in Iran now that anti-Tehran sanctions are gone?

A: Iran has much to offer to Italy and Iran will definitely receive important flow of investments from my country. Like our EU Partners, we look with interest to exporting more goods and services to Iran. Iran will probably need not just more consumers’ goods, but technology and knowledge. This is exactly the kind of exports our market has to offer.

Q: How do you evaluate the performance of Italian Prime Minister Matteo Renzi in 2015?

A: Our political Movement is the main opposition to Mr Renzi’s government in Italy, but this is not the reason we are not satisfied with his work in 2015. I may quote the new unconstitutional reforms the executive is trying to push, or the non-transparent management of multi-billion infrastructures like EXPO Milan, but I would like to focus on something broader: indeed, for the first time after the crisis Europe is growing again. Clearly, this is due to some exogenous conditions such as the extremely low price of crude oil or the weakness of the Euro currency; nevertheless countries like Ireland, Spain and Romania are performing extremely well, while Italy, once more, still lags behind. Our country is growing by a minuscule percentage and we blame Mr Renzi’s government, as it was not able to capitalize on the extremely favorable international conditions.

Q: What is your opinion about the unemployment situation in Italy?

A: Unemployment is still high in Italy: almost 12% of the population is unemployed, but the figure skyrockets way above 40% when you look at young unemployed. Mr Renzi has pushed an extensive reform of labor law that has done nothing to lower this, but that decrease workers’ rights and make it easier to fire them with no reason. Of course in time of crisis and huge employment, it is important to decouple work from revenue, this is why our Movement’s proposal is simple: introduce in Italy a minimum income scheme, like it exists in almost all EU countries, but the government has been indifferent to our request so far.

Q: What is your proposal for resolving EU economic crisis in 2016?

A: We saw enough austerity and selfishness in Europe. It is time to decide whether to be united and support each other or abandon what was once the European dream. The management of monetary and financial policy in Europe is still in the hands of a few powerful entities, while economic and fiscal policies are tied as long as they stay in national control without the monetary counterpart. We have a tough decision to make. Either we choose more integration, but then we must go down the path of more solidarity or we break this Union and leave each countries all the tools to adjust and face the crisis on its own. In the old times, national states were giving up their sovereignty to the European Community to achieve peace and prosperity, but nowadays I don’t wish to stay in a Union where sovereignty is given up to the supranational level without transferring as well the democratic scrutiny.

Q: What is your prediction of how Italy’s economy will be in 2016?

A: It’s hard to predict what the situation will be like in Italy in the next year, but probably this favorable international economical conjuncture will continue so it will depend on how the government will be able to take advantage of this opportunity. Unfortunately, from how it performed in the past, it is hard to be optimist.

Q: What measures can the Italian government take in order to fight extremism, Daesh terrorists in particular?

A: I cannot speak for the Italian government, but I can tell what I would do against extremism if I were in charge. The current situation stems from years of war brought by the west to countries on the other side of the world only for economic interests, while at home our governments criminalized and marginalized migrants. And even where integration worked, you still find extremism, because I believe that our societies stopped providing values to the young generations and what the young cannot find in their environment, they search in extreme ideologies. I was always inspired by a quote that goes “young people don’t need to be told what to do, they need examples”. We should probably focus on being the change we would like to see in our world, as one enlighted spirit once said. Extremism is a deep rooted problem and no short term solution will solve it. I want to add that the current situation of insecurity in Europe will not be solved by more bombs in Syria or Libya. For once we should try to fight terrorism inside our borders, instead of helping ISIS recruiting new people by bombing their homes.

Q: Do you have any suggestions for solving the crisis gripping the refugees fleeing violence in Syria and elsewhere in Middle East and North Africa?

A: On the issue of refugees our political movement has long emphasized the need to solve the problem at its roots. Take the example of Syria and Libya, those countries were Europe’s allies up to five years ago, even more: in the case of Libya we used to sell them weapons! How wise was that?