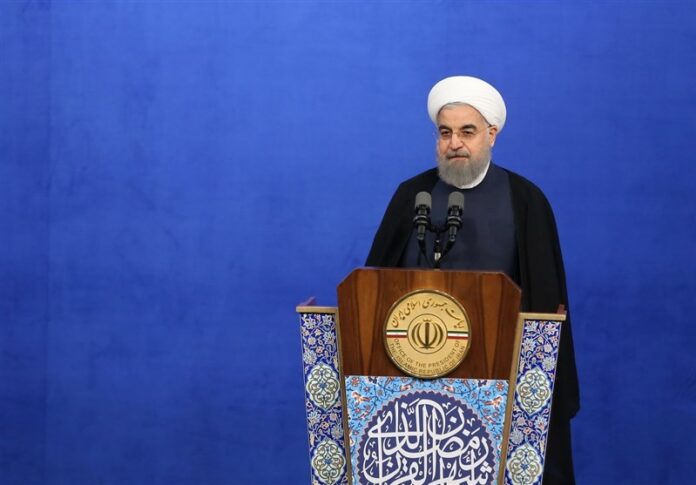 Iranian President Hassan Rouhani praised a recent missile strike the Islamic Revolution Guards Corps (IRGC) launched against terrorists in Syria as an appropriate and timely action, warning that any hostile plot against Iran is going to receive a harsh response.

Addressing an iftar ceremony with the presence of clerics in Tehran on Tuesday, President Rouhani hailed the IRGC’s missile attack on Daesh (ISIL) terrorists in Syria’s Deir ez-Zor as an appropriate, timely and necessary reaction.

Noting that Iran’s policy toward the regional and international issues has remained unchanged, the president warned the terrorist groups and the enemies of Iran that any plot to harm the Islamic Republic will receive a crushing response.

He also explained that the IRGC’s plan to fire missiles at the positions of terrorists from inside Iran was not a personal or sectional decision, but the Supreme National Security Council had already devised plans in retaliation for a recent terrorist attack in Tehran claimed by Daesh.

On Sunday night, the IRGC fired six high-precision missiles at positions of the Daesh terrorist group in Syria’s Deir ez-Zor. According to reports, all missiles have hit the targets, wreaking destruction on Daesh sites and killing dozens of terrorists.

Elsewhere in his remarks, President Rouhani said clarifying Islam to the young generation is an essential principle, adding, “The burden of responsibility on the shoulders of clerics and seminaries for clarifying God’s laws and Islamic beliefs to bring the youth closer to religion is harder today compared to yesterday”.

“Topics of monotheism, prophecy, imamate and divine justice are not topics that we need anyone to vote for, these are scientific, theoretical, rational, and reasoning issues,” the president’s official website quoted him as saying.

“The Islamic Republic of Iran will continue its way with more dignity and greatness and we will keep our unity and integrity,” he added.