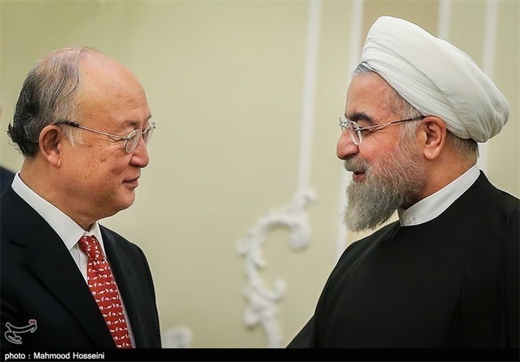 We would like to see that the world’s public opinion trusts the IAEA, because confidence in the agency will give calm to the world’s people, President Rouhani told Amano.

At a meeting with IAEA Director General Yukiya Amano in Tehran Sunday, Rouhani described the duties of the UN nuclear watchdog as “significant and complicated” in technical, legal and political arenas.

“We would like (to see that) the world’s public opinion trusts the IAEA, because confidence in the important institution will give calm to the world’s people,” he said.

Rouhani further recalled Iran’s undertakings under the Joint Comprehensive Plan of Action (JCPOA) and said that Iran voluntarily implements the Additional Protocol of the Nuclear Non-Proliferation Treaty (NPT) and in return expects the IAEA to fairly monitor the implementation of JCPOA.

Accompanied by a four-member delegation, including his deputies, Amano arrived in Tehran to attend a session of parliament’s JCPOA Review Committee and facilitate the process of implementing the Roadmap signed between Iran and the IAEA.