President Reiterates Iran’s Resolution to Side with Iraq against Terrorism 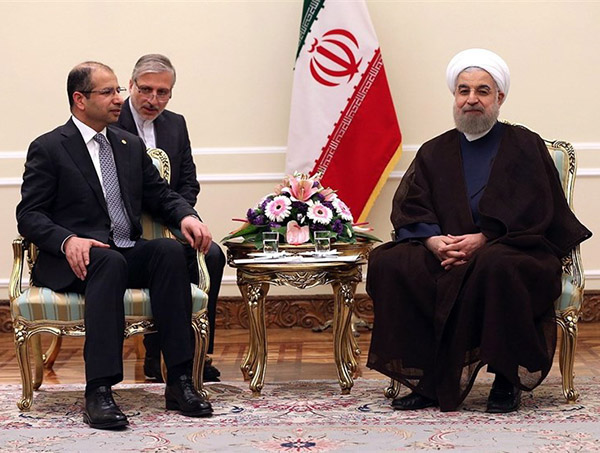 Iranian President Hassan Rouhani pledged the Islamic Republic’s continued support for neighboring Iraq against foreign-backed terrorists, saying that Tehran will stand by Baghdad “to the end”.

“As it has stood by the Iraqi people and government up to now, the Islamic Republic of Iran will continue to side with them in the fight against terrorism,” Rouhani said in a meeting with visiting Iraqi Parliament Speaker Salim al-Jabouri in Tehran on Saturday evening.

He further pointed to the recent achievements of the Iraqi Army and popular forces against terrorists, saying that undoubtedly, strengthening “foundations of unity” among all Iraqi political and ethnic groups would guarantee the continuation of such victories against terrorism.

The Iranian president also emphasized that the Iraqi parliament is a symbol of unity and fraternity among all Iraqis and can promote national unity through taking on an integrated role in the anti-terrorism campaign.

The Iraqi parliament speaker, for his part, underlined that Iran has played a leading role in the fight against terrorism and sided with the Iraqi nation.

Jabouri added that Iran and Iraq must promote cooperation and make efforts to restore peace and security to Iraq and across the Middle East region.

Iraq has been facing the growing threat of terrorism, mainly posed by the Daesh (ISIL) terrorist group.

However, a combination of concentrated attacks by the Iraqi military and the volunteer forces, who rushed to take arms after top Iraqi cleric Ayatollah Ali al-Sistani issued a fatwa calling for fight against the militants, have blunted the edge of Daesh offensive.