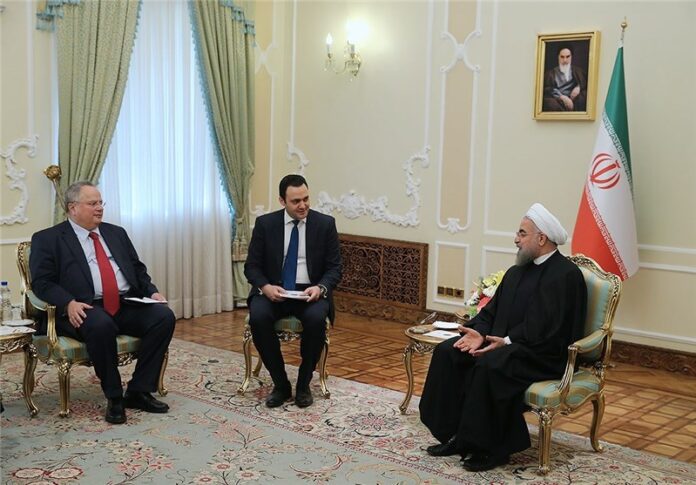 President Rouhani has said that termination of the anti-Iran sanctions under JCPOA will immediately raise Iran-EU economic cooperation to the appropriate level.

Iranian President Hassan Rouhani expressed the country’s determination to implement a final nuclear deal with world powers, provided that P5+1 (Russia, China, the US, Britain, France and Germany) and the IAEA live up to their commitments under the agreement.

“If the members of P5+1 and the International Atomic Energy Agency remain committed to the full implementation of the nuclear agreements under JCPOA (the Joint Comprehensive Plan of Action), the Islamic Republic of Iran is resolved to carry out JCPOA,” President Rouhani said in a meeting with Greek Minister of Foreign Affairs Nikolaos Kotzias, held in Tehran on Sunday.

He noted that termination of the anti-Iran sanctions under JCPOA will immediately raise Iran-EU economic cooperation to the appropriate level.

Once the nuclear deal takes effect and the “cruel” sanctions against Iran are lifted, Tehran and Athens should enhance bilateral relations, the president further said.

He added that the historical and cultural commonalities between Iran and Greece have provided good grounds for the expansion of their bilateral ties in academic and scientific fields, advanced technologies, tourism and economy.

Kotzias said he has brought an extensive plan to Iran on behalf of the Greek government on closer cooperation on issues of mutual interest.

He noted that he will present the plans in the meetings of an economic delegation that accompany him in the visit.