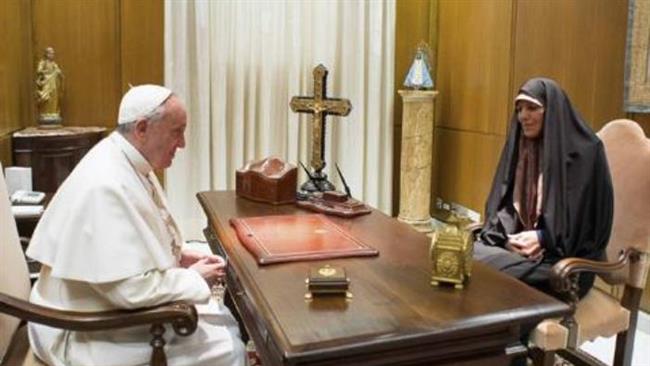 Pope Francis has voiced support for Iran’s efforts to ink a comprehensive nuclear deal with P5+1, saying he stands by the Iranian nation and government.

Pope Francis has lashed out at those in the Western societies who keep justifying their insults against religions by resorting to notions such as freedom of expression.

In a Thursday meeting with Iran’s Vice President for Women and Family Affairs Shahindokht Molaverdi at the Vatican, the Pope stressed that freedom of expression does not mean insulting religions and religious sanctities.

The spiritual leader of the world’s Catholics has repeatedly expressed discontent with the growing trend of religious desecration in the West, which gained a new momentum in the wake of deadly terrorist attacks in France in early January.

On January 7, the office of French weekly magazine Charlie Hebdo came under assault by two gunmen. Some 12 people were killed in the incident, which was claimed by the al-Qaeda branch in Yemen.

The Pope also voiced support for Iran’s ongoing efforts to secure a comprehensive agreement with P5+1 over its nuclear program, saying he stands by the Iranian nation and government.

In January, the Pope expressed hope that an agreement could be reached soon between Iran and the six powers – Russia, China, France, Britain, the US and Germany.

Last December, Iran’s President Hassan Rouhani sent a message to the Pope and congratulated him on the anniversary of the birth of Jesus Christ, asking him for more sympathy and cooperation in establishing peace and security across the world.