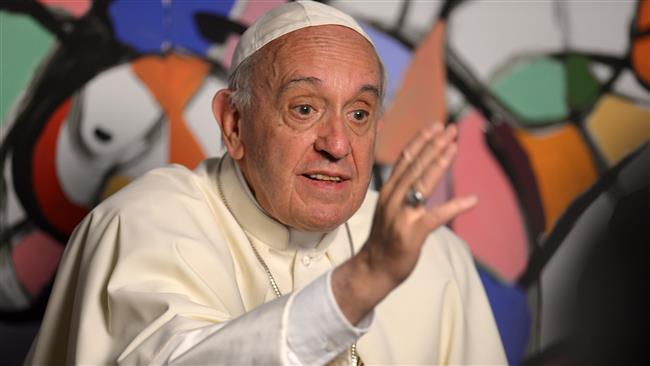 Pope Francis, the head of the Roman Catholic Church, has condemned the recent deadly twin terrorist attacks in the Iranian capital, Tehran, offering condolences to those affected by the assaults.

Cardinal Pietro Parolin, the Vatican’s secretary of state, said in a telegram sent to Iran on Friday that the Pope was sending “heartfelt condolences to all those affected by the barbaric attack in Tehran” and lamented the “senseless and grave act of violence.”

The Pope “commends the souls of the deceased to the mercy of the Almighty” and “assures the people of Iran of his prayers for peace,” the telegram read.

At least 17 people were killed and 52 others injured in Tehran on Wednesday when gunmen mounted almost simultaneous assaults on Iran’s Parliament (Majlis) and the Mausoleum of the late founder of the Islamic Republic, Imam Khomeini.

The Takfiri Daesh terrorist group claimed responsibility for the attacks.

The representatives condemned the attacks and expressed their sympathy and solidarity with the Iranian nation and government.

Dozens of other Lebanese political, religious, cultural, economic, and media figures as well as foreign ambassadors and diplomats in Beirut also signed the book of condolence.

Separately, Lebanon’s Foreign Minister Gebran Bassil held a phone conversation with the Iranian ambassador to Beirut, denouncing the Tehran assaults and stressing that his country stood by Iran in fighting against terrorism. The Lebanese Foreign Ministry had earlier issued a statement condemning the attacks.

In another development, Moldovan President Igor Dodon sent a message of solace to his Iranian counterpart, Hassan Rouhani. He described the June 7 attacks as “unjustified,” voicing his and his nation’s empathy and solidarity with the Islamic Republic.

Dodon also expressed the Moldovan nation’s all-out support for Iranians and the families of the victims of the terrorist attacks in Tehran.

Following the terrorist assaults, Iran identified and arrested dozens of Daesh elements through a series of sophisticated intelligence operations.

The Iranian Intelligence Ministry said the five perpetrators of the two attacks in Tehran had previously left Iran after being recruited by Daesh and participated in the terror outfit’s atrocities in the Iraqi city of Mosul and the Syrian city of Raqqah.

Iran’s Intelligence Minister Mahmoud Alavi also said that more than 100 other terror plots had already been foiled in the past two years.